I made a post the other day that mentioned that Tom (my cat) was sick again. I picked him up on Saturday because the vet’s office would be closed all weekend and brought him home. He was still looking really rough, but I was really hopeful that once he got home, his appetite would start to come back and we’d slowly get some food in him like we did last time he had pancreatitis. But that didn’t happen… He stayed in his cat carrier almost the entire time other than coming out to hang out on the porch for a few. His nose stayed dark purple and dry despite continuing his fluids at home. He looked miserable and he wasn’t even interested in food.

I talked to Jon yesterday about what we do next. Do we pay more? His vet bills last week totaled just over $1600. We were already so far into it that I wasn’t sure if we should spend a little more to get him healthy or would it just be a downward spiral and we’d end up paying a few thousand dollars a year on him? (We just spent $1000 on him in December on what the vet had said then was the most severe case of pancreatitis he had ever seen in a cat, and this case of pancreatitis blew that out of the water.) He just turned three. I knew that for him to be that sick, he has something wrong with him and we probably wouldn’t figure out what it was. We weren’t sure what we would do, but I was so hopeful going into the vet today that we would magically get an answer of how to fix him.

But I didn’t. I didn’t get any good news. Dr. P said we could try to do a feeding tube but even that wasn’t necessarily going to fix him. He has so much fat in his blood that managing the diet even through a feeding tube was going to be difficult for the vet. And they knew with how severely sick he was, it was going to happen again. Even if his pancreatitis got under control, he would end up with diabetes for sure. But given the severity of his illness this time, she didn’t think he would come out of this and not have another case. She said he’s a medical mystery and even the other vet came in and said that he wondered all weekend long what they could possibly do to fix him, but they hadn’t seen any cat ever present like he has, or as serious as he was.

So I called Jon and we made the decision to put him to sleep. Of course Jackson was not cooperating at all at the vet this morning and I am kicking myself so hard for taking him. Jon was home this morning and we had plans to go to the Braves Home Opener tonight, so I figured he wouldn’t get called in. But Jackson is always good so I went with it. And the whole time I was messing with Jackson and not paying attention to Tom.

They took Tom back to put an IV in him while I changed Jackson and then they brought Tom back and took Jackson to the back so the vet techs could hold him. They sedated Tom and put him to sleep while I held him and cried. I wish I had taken longer to say goodbye before he went. They asked if I needed another minute but I said no. I wish I had taken another minute or five or ten. I wish I had held him longer and given him a million more kisses and just felt him a little bit longer. Then he was gone…

I am devastated beyond words. I’m heartbroken. He was so young and he was always so entertaining. I told Jon all the time that our house would feel so empty without him here. He was by my side every day while I did homework (usually laying in my arms, actually) and slept with me and snored every night. He kept me company while I watched TV and sat on the bathroom counter every morning while I got ready. He would save Jon and me from the fan in the living room by standing up and meowing at it. He purred like an engine and hugged and cuddled our hands to his face. He brought so much joy to my life every single day and I missed him like crazy every time I was gone.

I can’t believe I won’t see him again. And I feel so guilty because I noticed that he hadn’t been eating over the last month. I mentioned it to Jon and I knew he was getting sick again, but he was acting fine and I was so caught up with Jackson. And I feel so silly for this, but I almost resent Jackson for taking my attention away from Tom. What if I had taken him to the vet earlier and we figured out what food would work for him to lower his triglycerides? What if we just put in a feeding tube today and he didn’t get sick again? Why didn’t I spend more time cuddling him and loving on him yesterday when I knew deep down that it was his last night with us? Instead, I cleaned the house. I pet him a few times but I never picked him up and cuddled him. I should have brought him in bed with me and loved on his one last time. But I didn’t. And I will never be able to again. And maybe I could have stopped him from getting so sick…

I feel like maybe I made the wrong decision today even though the vet assured me that he would never be a healthy cat and he would have a long road and be miserable again in the future. But my heart hurts so much. I feel sick thinking about not seeing him again. The house feels so empty without our other family member. 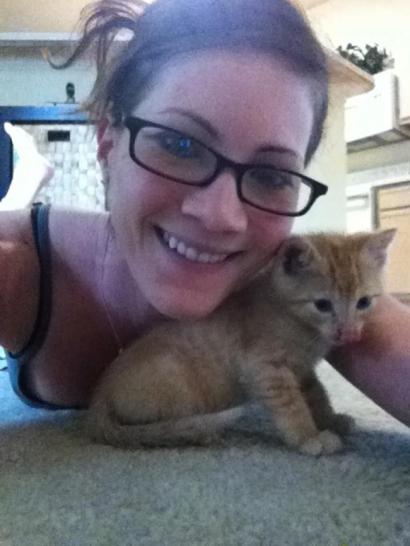 One of my favorite pictures of Tom from when he was a kitten. I got him three years ago in March. 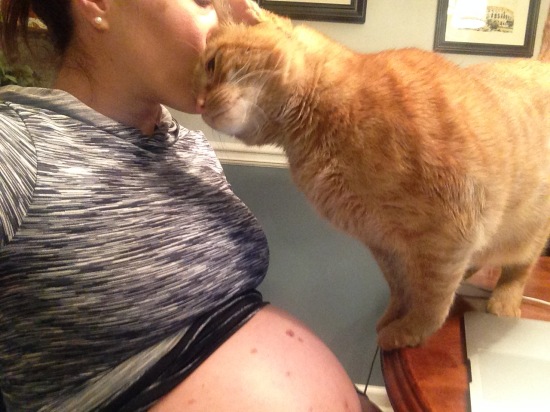 He was always loving on me. 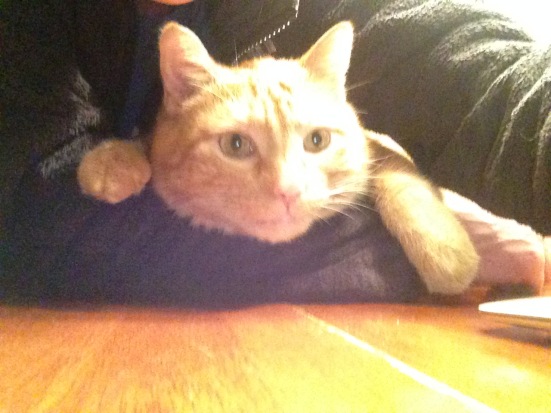 Hanging out while I did homework. 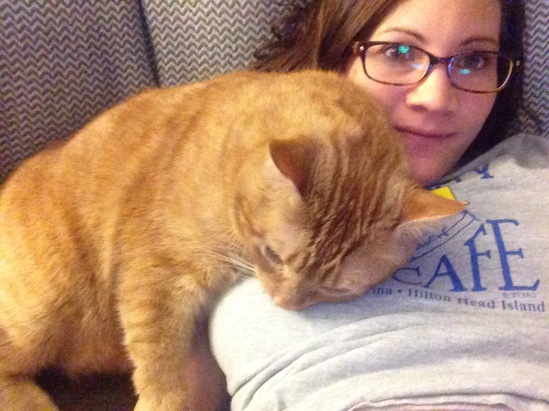 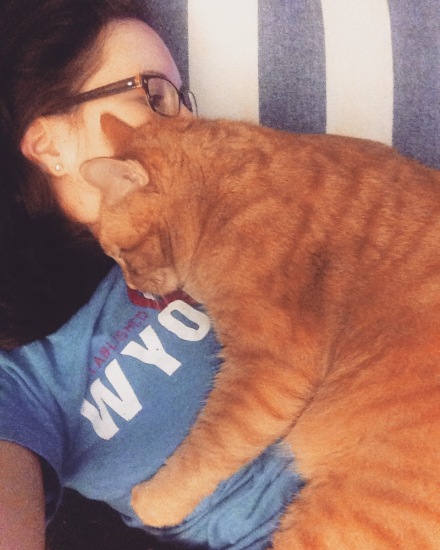 My favorite picture of us. He was hugging me. 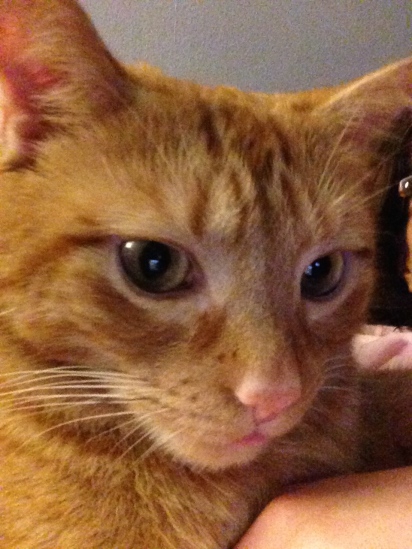 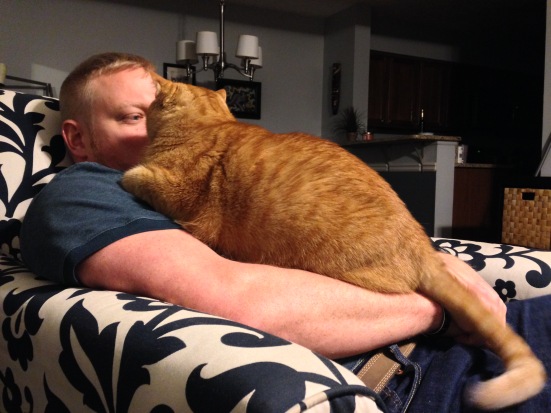 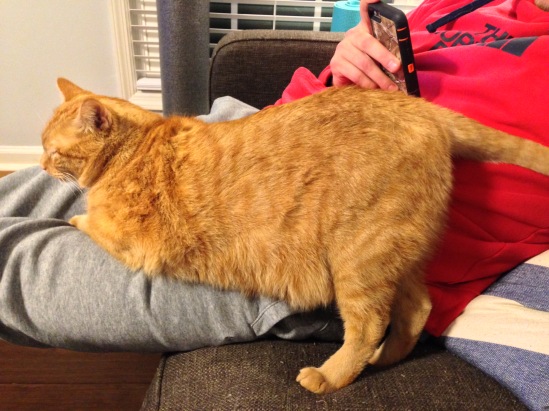 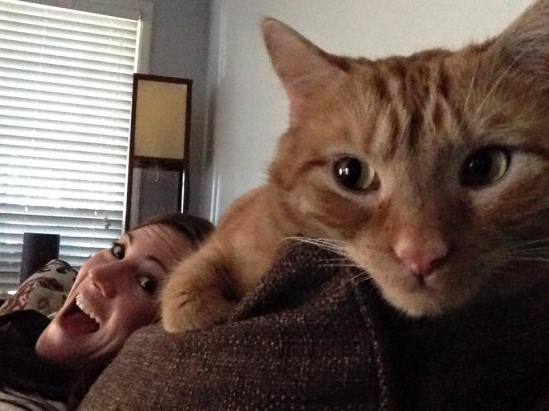 Another one of my favorite pictures. 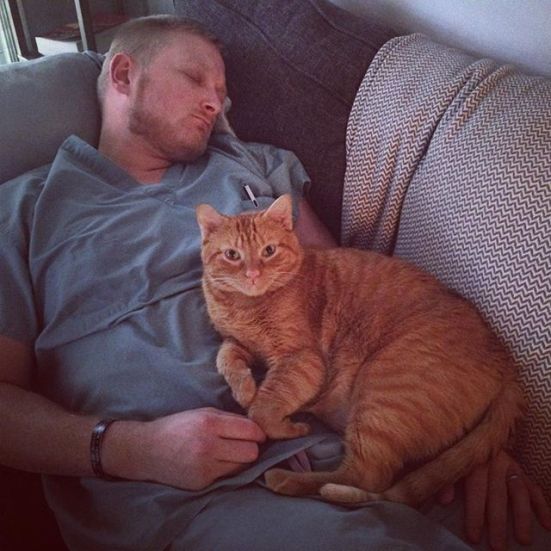 Okay, they’re all my favorite! He loved Jon so much! He was always sleeping on his chest. I would come pump at night while Jon slept on the couch and Tom would be sleeping right up by his face. 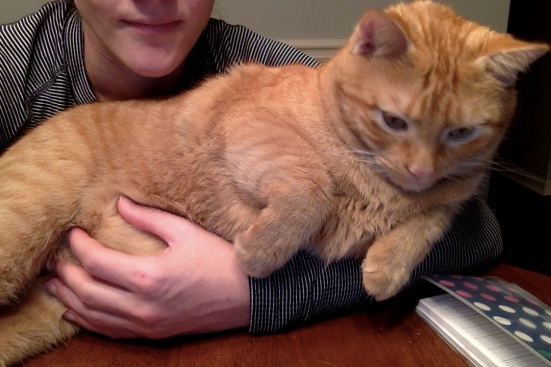 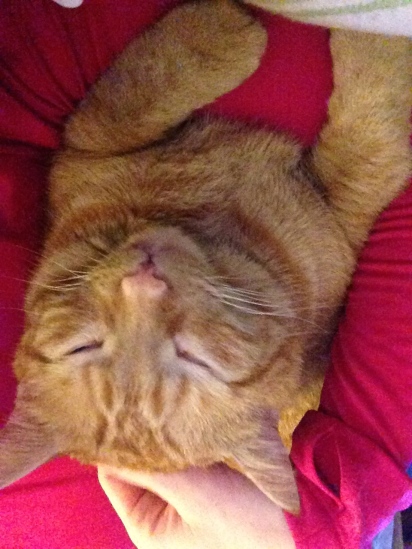 He loved to spoon with us in bed. He’d come lay like that and then hug our arms to pull them close to him. 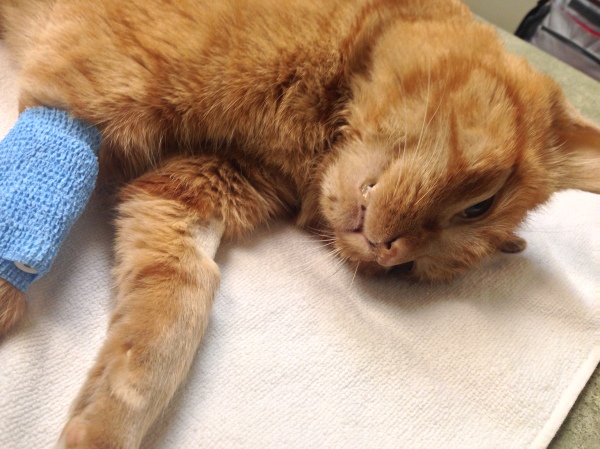 That’s it… Maybe a little morbid, but that’s my last photo of him after he was gone.

That last picture breaks my heart. I wanted to bring him home and be able to hold onto him longer. I didn’t, but I wanted to so bad. It broke my heart watching the vet walk away with him and giving him one last kiss. I wanted to hold him forever. I’ve had pets die, but I have never been there when it happened. (We actually just put my other cat down two weeks ago, but I haven’t lived with him in years and he was 19 years old.) Tommy just turned 3…

Goodbye, Tommy. You were the most loved cat ever. I can’t put into words how much you’ll be missed.

8 thoughts on “Goodbye My Friend”