This has been a really rough few days. I miss Tom and feel more guilt than I could have imagined. I knew that he wasn’t eating as well for the last month and normally, I would have taken him to the vet, especially knowing that he had pancreatitis so recently. But I was so busy with Jackson that I didn’t… Although I know he was sick and he probably wouldn’t have lived to be 15, I wonder if we could have had another year with him. Or even another few weeks. If I had caught his pancreatitis earlier this time, it could have gotten better like it did last time. I also feel so guilty because I think Jon and I were both pretty aware that Tom was going to be put to sleep Monday but neither of us wanted to accept it. Instead of bringing him up for love with both of us on his last night, we left him in the cat carrier (where he wanted to be- I brought it into the bedroom and pet him every time I got up to feed Jackson and he could have come out if he wanted). Instead of Jon being there when we put him to sleep, Jon stayed home. I also thought so many times over the last month how I wasn’t spending enough time with the cats because of Jackson and I just brushed it off. He was just so young and I wasn’t ready for him to go. I really wish I could just go back and redo his whole last month. I know his time would have come sooner than later, but I wish I could be at peace with the last little bit of his life. As silly as it is, Jon and I both almost wish we had them put in a feeding tube, but we know it would have been selfish. Tom would have hated it and even the vet said that it would have been difficult to manage his diet with it. But would he have gotten better? I don’t know. We feel like maybe we gave up on him too soon. How could we give up on our family like that?

I know he was “just” a cat. But he was my baby and he was my baby before Jackson ever was. I can’t put into words how empty this house is. Jon’s shirt was on our bed last night and I walked into the room and thought it was Tommy. Every time I turn around, I expect Tom to be here. When I go into the bathroom, I wait for Tom to bust through the door (he was never gentle) and take a poop and then hop up onto the counter and sit on my makeup. I keep looking down so I don’t step on him in the kitchen since he would always plop down right in the middle of the floor. I want to cry every time I look at the food bowl because Tom would always try to reach his paws up into the reservoir and get more food out. I miss him laying in my arms while I’m on the computer and purring so loud. I can’t wash my pants that have his fur on them because once his fur is gone, he’ll be gone. I even had to have Jon scoop the litter box because I had seen him go in there the morning I put him to sleep and as silly as it is, I couldn’t bring myself to get rid of any piece of him.

It’s been rough. Jon and I have talked a lot about our good times with Tom and I’ve looked at millions of pictures of him. It’s heartbreaking knowing he’s not ever going to be here again and that he’s actually gone. He’s not just at the vet anymore waiting for me to go pick him up. I will never smoosh my face into his fat belly and give him kisses. I will never wake up to hear him snoring (so loud!) by my side. I will never wake up to him spooning with me or sitting on my head and demanding my love. The house feels so empty. I dread coming home and knowing that Tommy won’t be here.

This is so much harder than I ever thought it would have been. I knew that whenever the day came, putting a pet down would be difficult. I’ve had three other cats that have died since my childhood. I was 10 the first time it happened and we put Tiger to sleep. I remember being so upset about it but I was young and my cat wasn’t that affectionate. After that, I had gone to college by the time my cats died. Stinker died when he was 11, but I had been in Iraq for a year and my parents told me about it on the way home from the airport. So I hadn’t seen him in a year. And Sam was just put down two weeks ago, but he was 19 and lived a full life and went downhill really fast to the point where he couldn’t even get up to walk the morning my dad took him to the vet. Tom… Tom was a part of our life every day. He never left our side. This is the first pet that I went from seeing every day to being gone. My heart is broken into a million pieces. I get physically sick feeling when I think about how I won’t see him again.

I just want this to get easier. I want to stop missing Tom so much. Jon said he wants to go look at cats and get another orange cat and name him in honor of Tom (we’re thinking TJ for Tom Jr)… But I can’t do it yet. And that orange cat will have some big shoes to fill!

Losing Tom really makes me wonder how parents lose children. Or how Jon and I will handle it when we lose our parents. I know we’ll be a mess. I watched my best friend’s parents lose their daughter (my best friend’s sister, obviously) when I was in high school. I will never forget walking out of the hospital with them after that. And I just can’t imagine with how empty we feel losing a cat and how devastating this is, how hard it would be to lose a person.

And now for another photo gallery of Tom, because I need to see him some more. I need to share what an awesome cat he was and show everybody how loved he was and how much we loved him.

This was actually in December after he got over his pancreatitis last time. I had been so upset about how sick he had been and I got home from work that night and Tom was back to himself. He crawled up into my arms and started purring for the first time in 5 days. You can see that I was crying tears of joy. I sent this picture to Jon since he was in Florida and he was so excited that our Tommy was better.

Such a lover. We never picked him up. He would always crawl up onto us like that and make himself at home.

If I wouldn’t hold him in my arms like in the first picture, he would just sit right next to me. 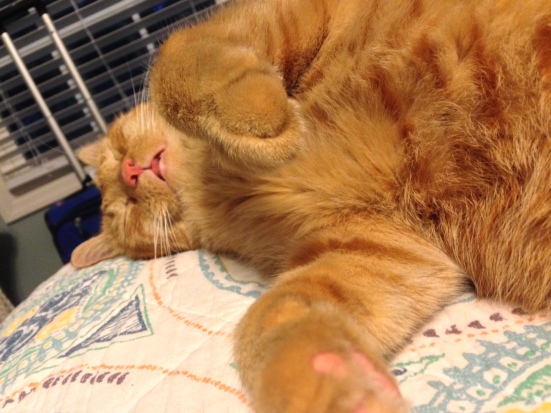 Before I had Jackson, I would stay in bed till 10am. Tom would always be sleeping on the bed with me, and when he saw that I was awake, a lot of times he would come get his cuddles. If I didn’t have to be anywhere, I would stay in bed extra long just to love on him. I am so glad I did that now. I’m so glad I just enjoyed his love and soaked it up in the morning before Jackson got here.

His spot on the top of the couch.

He looks so happy in this picture! Love his smile there. 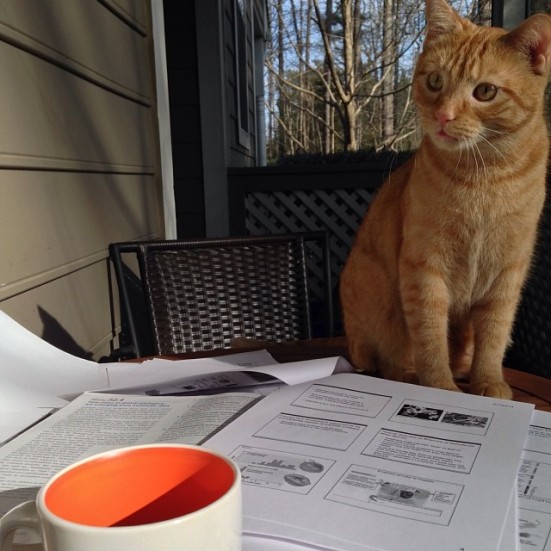 I feel like Tom has been a part of our lives forever, but when I look at this and see how small he was, I remember what a short time he was really with us for. 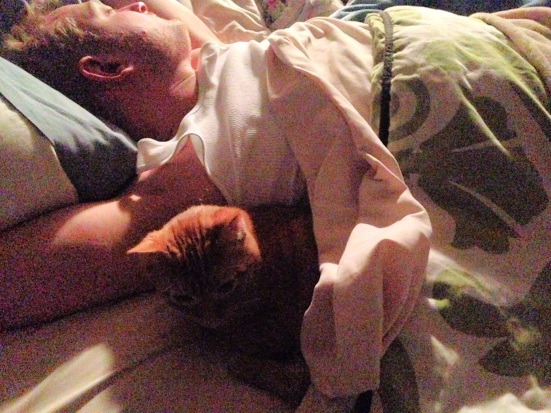 Jon always used to tell me “Him luuuuuuh hi’ daddy!” And he did. Tom loved Jon so much. I woke up one morning and Jon was sound asleep and Tom had crawled under the covers with him. Again, he was much smaller in this picture…

7 thoughts on “Losing My Cat”