After my gym fail yesterday, I laid on the couch all day. Not even an exaggeration. I was nauseous and felt really under the weather, so I just watched Real World on Demand until Jon got home and made me something to eat. Then I napped. Then I took Benadryl and still went to bed by 10.

I met up with Laura this morning for another ClassPass try at Elevate Your Body for their cardio muscle mix class. It was a a smaller studio but as soon as we walked in, Ellen, the trainer for this morning’s class, was so welcoming! She ran us through how to set up our stations and asked Laura and I about our fitness. We started the class and it was a lot of stepping up onto the platforms and using 3# weights. I actually really enjoyed the class a lot! Ellen was great about asking throughout the class how everybody was doing, and at the end when she got to a more advanced ab move that nobody was doing, she changed it up to something we could all do. Although I don’t think my heart rate ever got all that high, my arms and abs were burning, even with the lighter weights.

The only thing I didn’t like (which would never stop me from going back) was that she said a few times that we were lifting lighter weights to build long, lean, feminine muscles and that we don’t use over 10# so that we don’t bulk up. I’m always against when trainers/coaches try to tell you what you would want to look like. I like building muscle. I like looking as strong as I feel. But like I said, it’s nothing that would ever stop me from recommending the studio. I still thought Ellen was great and it was such a nice way to change up a workout! And despite the class being an hour, I never got bored with it and started watching the clock (that frequently happens with me in these hour long classes).

I made a stop by Zukerino Pastry Shop right near my house. The bakery looks like a bit of a dump and is near a somewhat sketchy gas station. I’d never really had any interest in going there till I read a ton of 5 star reviews on yelp! So we gave it a shot and their baklava is out of this world! It was so dang good! Our interpreters used to bring baklava back to base when they would go home when we were in Iraq, and this was a million times better. 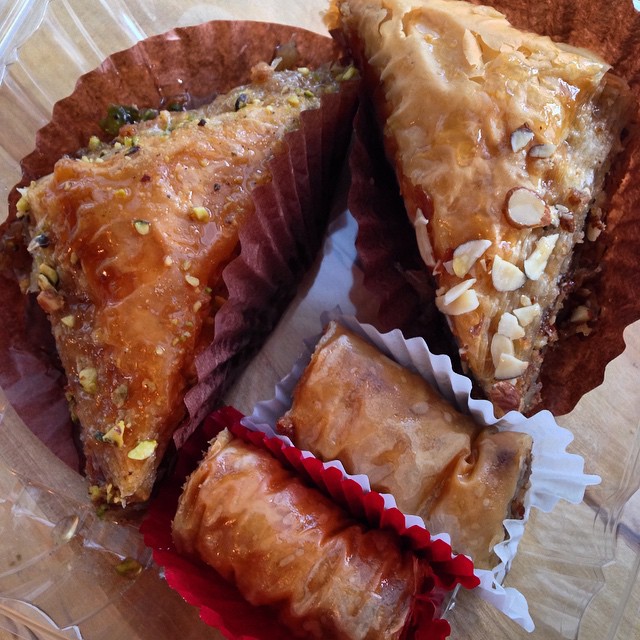 After I got home this morning, I showered and Jon made me breakfast, and then I climbed back in bed for a 4 hour nap. We were wanting to go to the Chattahoochee Coffee Company that I went to last week since it’s sunny out, but I didn’t even have enough energy to get dressed. Instead I just laid on the bed and passed out.

I’m about to start getting ready for our date night. Today is our big one year anniversary! We made it! We’re going to the Melting Pot and then he said he has a surprise, so we’ll see what that is! Hopefully I’m rested up enough to make it out of the house for that long today since my energy level is just so low.