I’M HOME! I’ve actually been home. I should add to my list of things to blog about: Why I’m such a horrible wife and how long it takes me to adjust to having my husband around again and why travel nursing is hard on marriages. But that doesn’t sound like any fun. I will just assure you all that it took me until halfway through the day yesterday to recollect myself and stop actin’ a fool, and now Jon and I can continue on as a happily married couple. We’ll be an even happier married couple in a few hours once I clean the bathrooms and the floors (since they haven’t been cleaned in 13 weeks).

Anyway, so Friday afternoon, Jon and I met in Beacon, NY. Our plan was to head to the Catskills for some camping but partially due to my bad attitude and having to run back and forth to get keys to drop our stuff off, we decided to just stay in Beacon and head to do a hike the next day!

We spent our afternoon walking around a park and driving around the cute little town of Beacon! 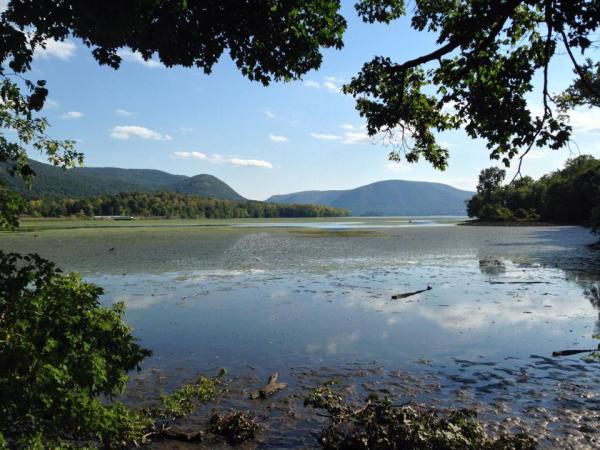 It was super cute and we walked around and enjoyed some nice weather! After walking around for the afternoon, we headed back to Paul and Sonya’s (Jon’s old coworkers who are dating and now live in Beacon) so that we could grab some dinner with them! 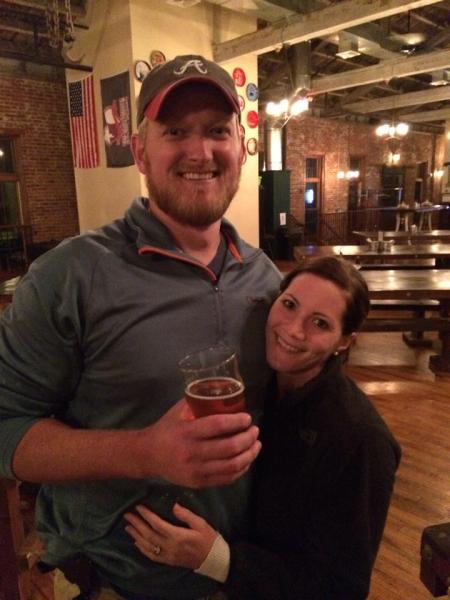 We headed out to the Newburgh Brewing Co and had a few drinks (I actually had a few cups of water) and then went to a fancy seafood dinner that took forever, but they warned us when we got there so it was no big deal! Jon and I were exhausted when we got back so we headed to bed!

Saturday we woke up fairly early and headed out for our Catskills hike! I used this website to find our hike, for anybody who is considering Catskills hiking! It was a great site! My goal for the day was to see a plane that crashed into the mountains in 1983, and the trail is listed on there! The hike said it was 3-4 hours and just under 6 miles! So we head out onto our hike thinking it’d be no big deal! The beginning of the hike was just annoying because you are stepping over roots and rocks nonstop but it wasn’t challenging at all. The trail was very clearly marked and we started our ascent. The ascent only had two spots where you had to actually climb up the rocks so it wasn’t bad at all. Also not very steep.

The views at the top were fairly decent but not quite as breathtaking as some of the other hikes I did in New England! However, this hike was easy peasy so I wasn’t expecting anything too crazy! And the fog obviously clouded our view (heeey-o). We continued on with our hike, expecting that the plane would be around the corner. I had never noticed that the trail directions don’t say anything about Stoppel Point (where the plane crash is) and none of the signs along the trail were to Stoppel Point. After hiking about 5 miles, we almost headed back since it was getting later in the day. We decided to go another 30 minutes before heading back. (At that point, we had figured out that the website was only reviewing the loop- which is the 6 miles- finding the plane is additional.)

Thankfully we did, because not even 1/4 mile later, we hit the plane! 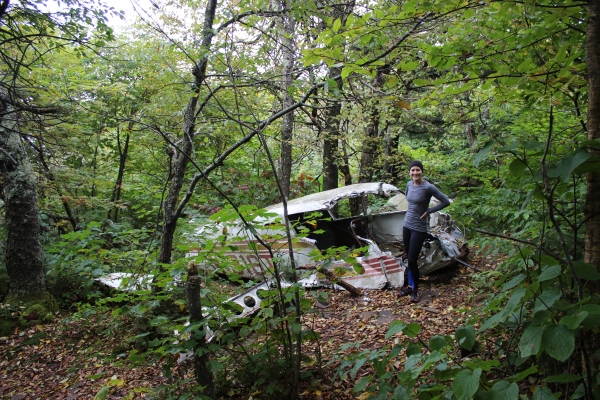 My new goal in life is  to find all the plane crashes in the mountains. I have 2 under my belt. I think they’re fascinating! Anyway, we headed back and had what we think was a 9-10 mile hike in about 4 hours. Not bad at all!

That night, Jon and I grabbed a quick dinner and ate some delicious cupcakes!

I’m not even a huge cake person but was craving cupcakes! And they were delicious! We ended up just heading to bed early on Saturday night since we were heading to NYC the next day and we were tired after our day of hiking!

Sunday morning, Jon, Paul, Sonya, and I headed to NYC! We took the train in from Beacon. Our first stop in NYC was the Chrysler building but it was closed.  We ended up going to an Irish pub for breakfast since Paul and Sonya were going to watch the soccer game there while Jon and I explored. Breakfast was iffy. I hate bar food so a bar breakfast was really not the highlight of my day, especially cause we walked by a Paleo restaurant like 30 minutes later (with PUMPKIN PANCAKES!).

Jon and I started our adventure by heading to the Financial District. It was about a 4 mile walk but we went by Ground Zero.

I was glad to see it but I have a hard time getting into memorials. I think they’re awesome but I just have a hard time feeling compassion over water going into a hole in the ground. I have to actually see people upset in order for my feelings to get involved (which is why dead people in Iraq never bothered me- we never had to see the family!). Historical stuff is the same way- cool to see but I can’t imagine people being there so long ago, so it’s hard for me to be amazed. I’m amazed by scenery and nature or really awesome architecture.

Our next stop was Hoboken and Lady Liberty! It was too foggy and we were too far to get a good shot of the statue. But the water was pretty! I actually have way more NYC pictures but I haven’t put them on my computer yet, so all you’re getting is the few iPhone pictures!

We met up with Paul and Sonya afterwards to explore two bars that Paul really likes. I had a serious bout of nausea for some reason right before we all met up so I wasn’t partaking in the beer, but it was still nice to hang out and sit down for awhile! We ended up heading towards Times Square afterwards and we decided to get a taxi. By the time we hailed a taxi, we were only 2 miles from Times Square. I rally when I travel. I prefer to just walk places, regardless of how many miles it is. I had no interest in the taxi, but then after spending 40 minutes and $35 to go ONE MILE in the taxi, I was beyond over it! We decided to just walk the last mile and ended up in swarms of people.

Jon and I both hate crowds. I had already expressed my lack of interest in NYC (which is a bummer cause I’ve wanted to go there for years) and my inability to understand why anybody would actually like NYC, but at that point, I was just over the whole thing. I can almost guarantee that we will never go back to NYC again. Why go sit in traffic and have to weave in and out of people when I could just go to Lake Tahoe?!

Paul and Sonya decided to go grab dinner but I really wanted to see Times Square during the day. We all split up again and Jon and I went on our way to do some exploring. We walked down the streets and then headed to Central Park.

By then, it was getting dark. Jon and I were arguing about everything (or just not speaking) and we were both hungry. I found a place on Yelp and we ate a quick $50 way-too-expensive-for-what-it-was meal, and then he took me to see Times Square at night!

The night ended up fine and I did enjoy my day in NYC, but like I said, no desire to go back! After hiking 9-10 miles on Saturday and walking at least 10 miles on Sunday, I was beat! I got into bed and didn’t want to move at all on Sunday night!

Monday Jon and I road tripped back! It was a beautiful fall day and I loved the weather! We made very frequent stops in the morning to get out and walk around. Both of us were so tired and I don’t want blood clots either! Once we started getting through the day, we stopped much less! We ended up going through Shenandoah for a quick detour.

Then we stopped in Charlotte for dinner and saw this amazing sunset when we were leaving!

And that was our weekend! We got home around 11 on Monday night and I’ve been loving being home! I’ll update you all on the rest tomorrow, but for now, it’s time to go clean the house!