Back to the last of my travel updates!

After we did the Redwoods, Jon and I decided we’d spend a night in Napa Valley and then spend the next morning wine tasting! We ended up only visiting one winery, Castello di Amorosa. Jon liked their merlot a lot and I loved their La Fantasia! Hands down my favorite wine ever! They only sell wine through the winery or website though, but so worth it! I would order it and pay S&H for that! 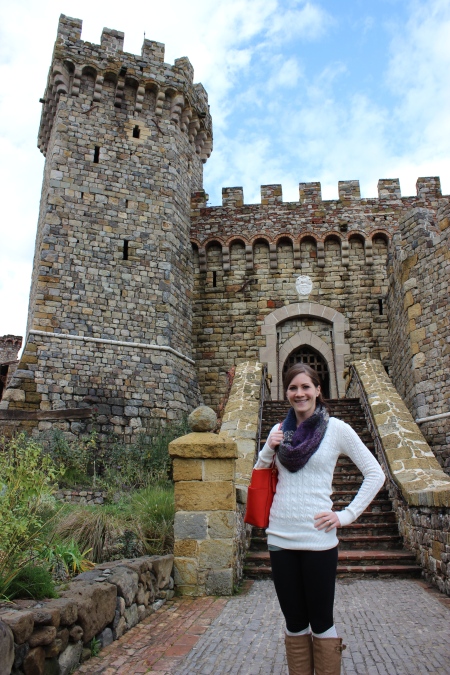 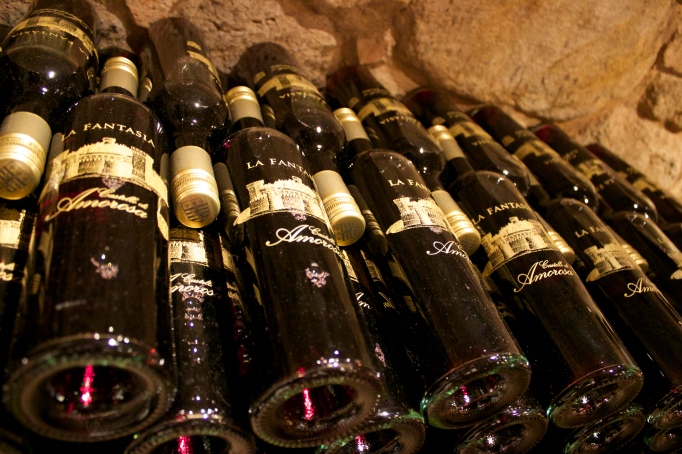 We headed into San Francisco after that! Come to find out, I almost disliked San Fran as much as I disliked NYC and am so glad we didn’t make a whole trip to San Fran alone (we have talked about it in the past)! It was pretty but a pain to drive around and due to how steep all the streets are, I would have no desire to walk around there either! We actually booked a hotel there for the night and ended up canceling because of how crazy the area was! Pier 39 was nice but just too crowded for me to really enjoy! I was blown away by the Golden Gate bridge though! We only saw it from the north end of the bridge, but I didn’t mind! I also convinced Jon to see the Full House houses too (we saw the original one too, which is a mile down the road from the park) and then I had the best hot chocolate of my entire life at Ghirardelli! I think it’s the whipped cream that does it! 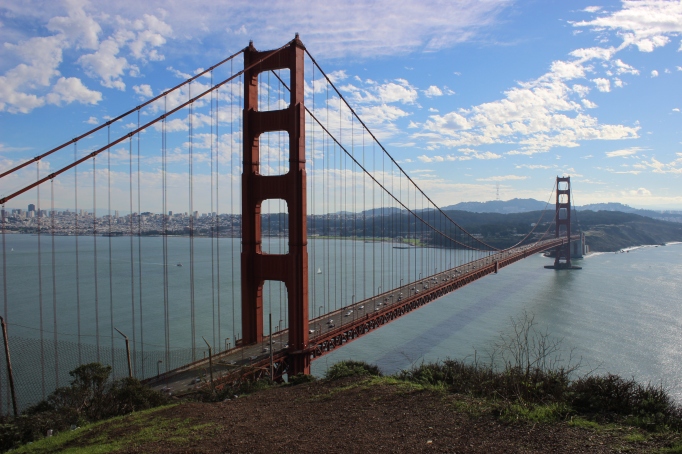 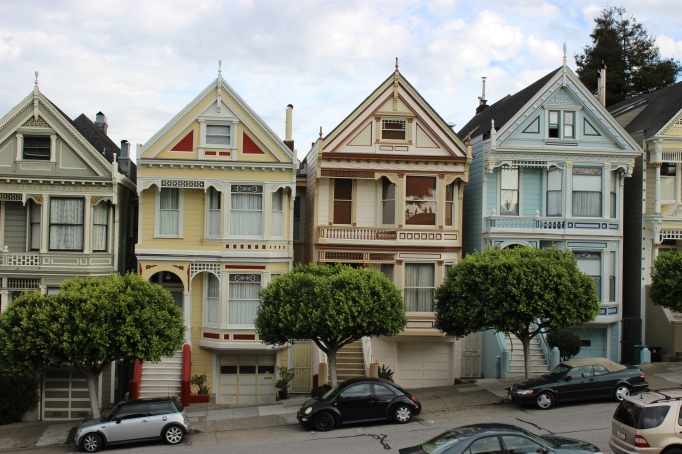 We ended up heading down to Maggie’s in Pacific Grove for a few nights! She is best friends with one of my good friends from nursing school and she’s on an assignment in California! She has a spare room so it worked out perfectly and we got along really well!

The next morning, Jon and I woke up to pouring rain. We had a completely lazy day other than dinner in Monterey and visiting a brewery! It was actually really nice to have a “zero” day where we did absolutely nothing exciting! I stayed up late chatting with Maggie that night about travel nursing and definitely enjoyed having some girl time with another nurse!

Jon and I woke up early the next morning in hopes of beating the rain storm that was supposed to hit and headed down to Big Sur! The whole drive was absolutely beautiful! It makes me want to live in California, but that state is out due to their gun laws (Jon immediately rules out any state where he can’t concealed carry). We both could sit and watch waves forever (and did watch them for a long time at a lot of these stops)! They’re just so big on the west coast and the beaches are so much better than the east coast beaches! 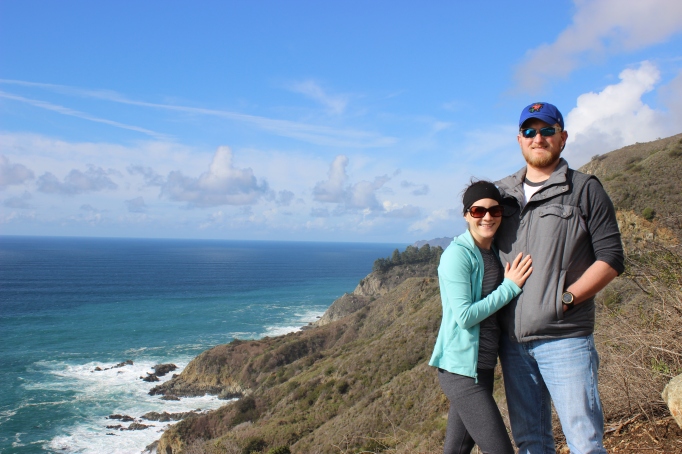 (We FINALLY dug the tripod out of the trunk!)

(One of the few waterfalls that flows into the ocean in the US.)

(Bixby Bridge. Also one of the most photographed bridges in the US.) 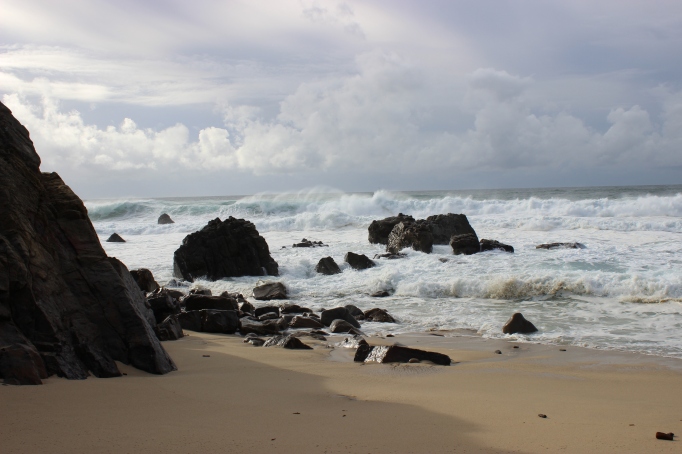 After our Big Sur experiences, we started along the 17 Mile Drive that goes right up by Maggie’s house! Unfortunately, it started raining less than halfway into it, but we did get to see this beach! I assume it’s Pebble Beach, even though Jon tried to convince me that Pebble Beach is just the name of the golf course.

The next day we decided to explore Carmel and Monterey early in the morning before making the drive over to a small town outside of Death Valley! We were in love with the beach area in Carmel and all the rich wives were out with their billions of dogs! I could seriously live that life. I don’t even have to be a rich wife! I can be a poor wife and I’d be happy to wake up to the beaches all the time! 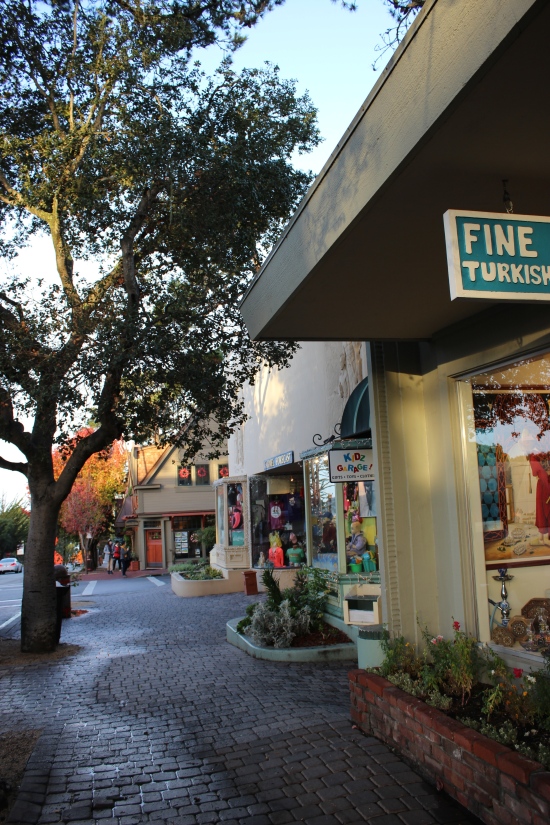 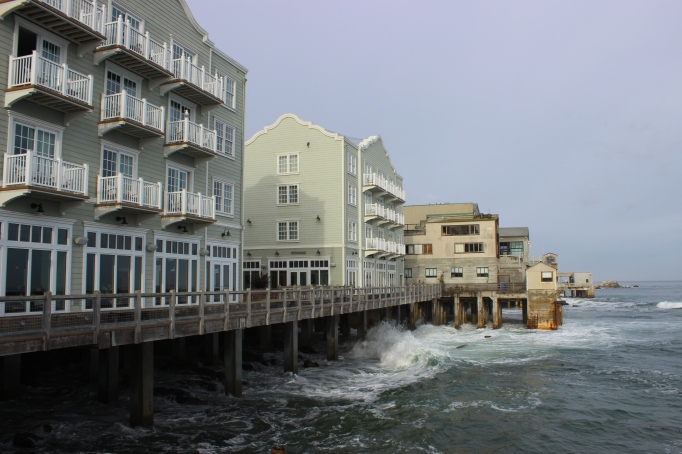 (This one is Monterey.)

After an afternoon of driving and a night in a ghetto hotel, we woke up for the longest day of our trip: Death Valley and Vegas. Death Valley was gorgeous but I would really not recommend it in any of the hotter months! My poor Civic was struggling with all of the elevation changes! The park was way more mountainous that I’d have ever expected but I am so glad we made it there!

(Sand dunes. Also, I woke up and my hair looked like that. Why can’t that happen every day?!)

(The area where they used to do borax mining.) 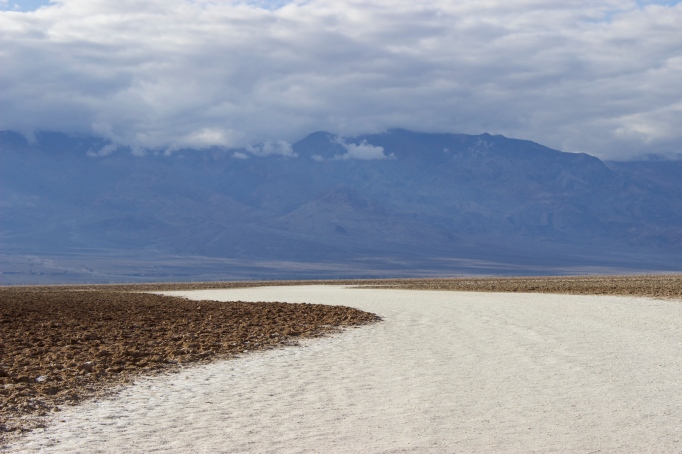 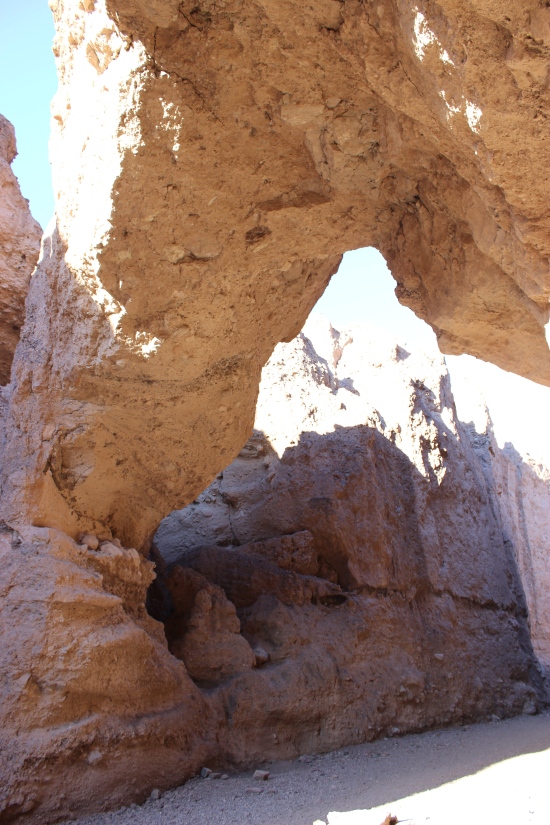 After Death Valley, the sun set and we headed out to Vegas! Off season rates in Vegas are awesome and the rooms and spectacular! Go! It was definitely fun to go there, but we walked around from 7-1am and then got a whopping 3 hours of sleep before having to wake up for a full day of driving! The Bellagio fountain was probably my favorite part, followed by the New York area. The next day was spent driving! We had an 18 hour day (including two stops for sit down meals) and got into Oklahoma City around 1am! The next day, we met up with Cari, Jon’s coworker and my best buddy/gym buddy from Iraq! We had brunch at Kitchen No 324 (SO GOOD) and then went to an osteology museum. The highlight for me was the Oklahoma City National Memorial from the OKC bombing. If you ever go, definitely go to the museum. It was incredibly well done. Jon and I hit up a brewery while Cari was with her son and then all met up for dinner and a walk around the canal! 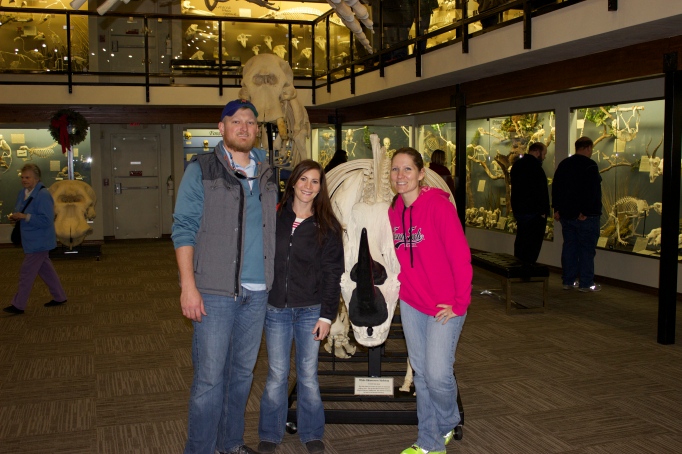 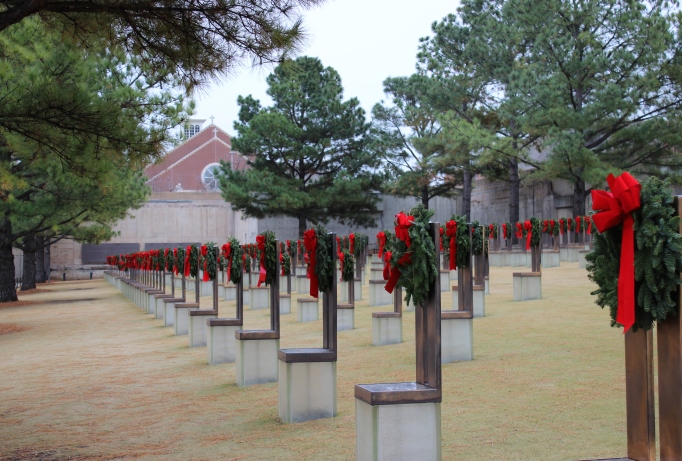 The last day was another full day driving home! Sorry for the super long post, but I just wanted to get all the updates done and move on with my regularly scheduled blog posts (kidding- none are scheduled).

Jon made it to Portland! Finally! He got here on Wednesday night and we headed directly downtown to grab a bite to eat at Pok Pok! The food there was a bit on the pricier side ($$ on Yelp, I’d say) but it was absolutely delicious! 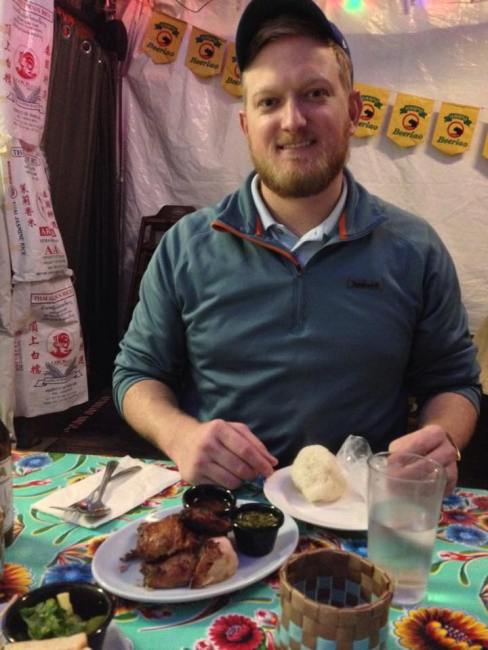 After that, we hit up an old school that was turned into a hotel/bar/theater before finally making our way to the Deschutes Brewery for a quick drink before calling it a night!

Thursday we had another Portland day! We ended up getting breakfast at the Waffle Window (my favorite) and then headed down to the Pittock Mansion so Jon could get a quick view! My car was rear ended in the parking lot but thankfully, all was okay and there was no damage! Next stop was the Rogue Brewery! I wasn’t able to drink because I felt so horrible from my one beer the night before, but Jon enjoyed his samplers! We decided to just walk around, make a quick stop at Voodoo Donuts, and just do some city exploring! I had been wanting to get some pictures of the Portland sign at night, so we braved it in the insane wind until it got dark enough! 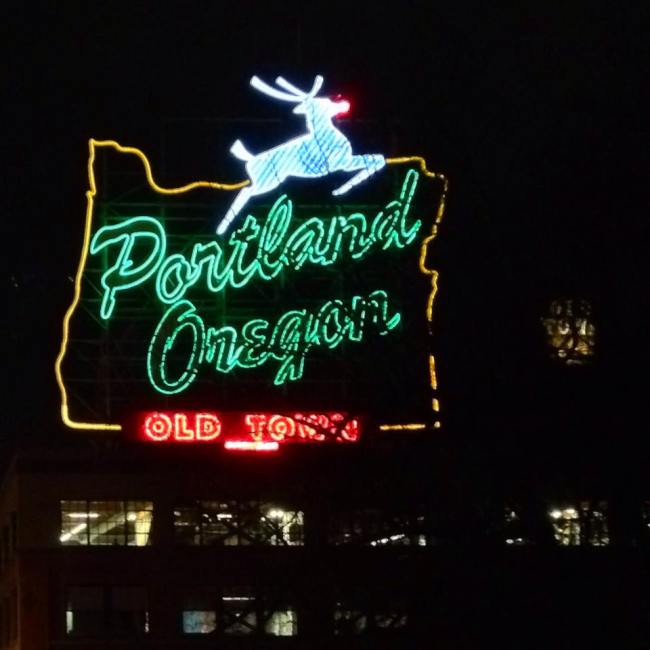 We made it back home so that Jon could meet my roommate and her son and then I packed up all 8 weeks of belongings before I had one last sleep in Portland!

We headed out early on Friday morning!

It ended up being a very slow day because the Oregon coast is just so amazing! You guys are getting all my iPhone pictures on here since my camera ones aren’t up yet, but it’ll do! Our first stop was in Lincoln City so Jon could see the beach house I’ve gone to a few times! 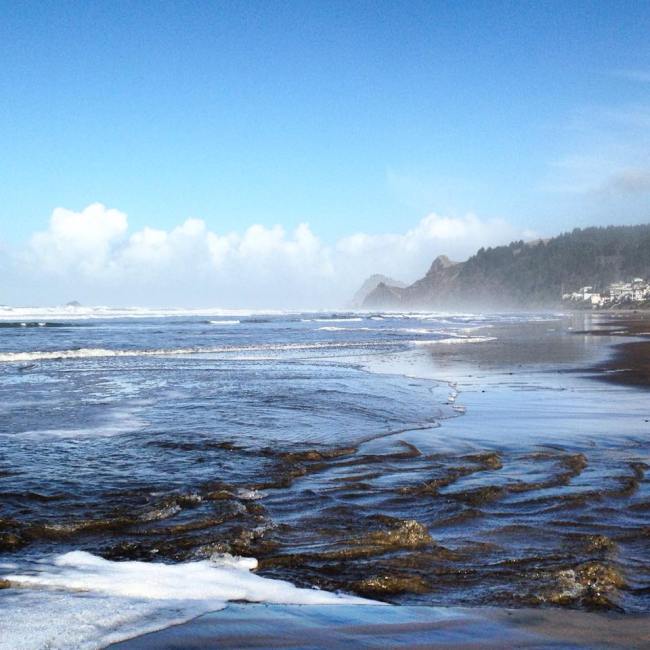 Can I even put into words how excited I was about having a sunny day?! I guess the big storms the night before cleared the path for the sun! Unfortunately, it was overcast in Portland when we left so Jon didn’t get a view of Mt Hood, but he didn’t mind nearly as much as me!

We spent a ton of time at Cape Perpetua! I had been dying to see Thor’s Well but was amazed at the first stop we made along the cape at Devil’s Churn! We stood and watched the water crashing in for quite some time before making our next stop! 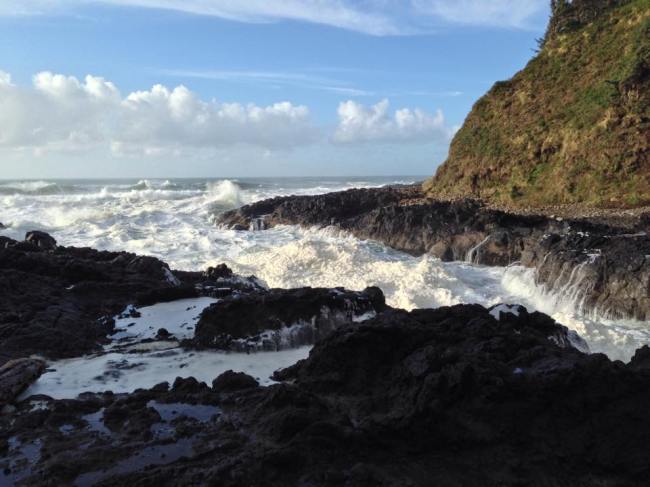 We headed down to the Spouting Horn hike since I had read that Spouting Horn was the same as Thor’s Well. They aren’t the same but they are in a very similar location. Below is Spouting Horn, which is right at Cook’s Chasm.

We did manage to find Thor’s Well but I wasn’t about to venture close enough with the huge waves coming in! I think the storm brought in some really harsh waves and currents to an area that already is pretty crazy, so I passed on that one! We probably spent an hour at Cape Perpetua before moving along to Heceta Head Lighthouse! 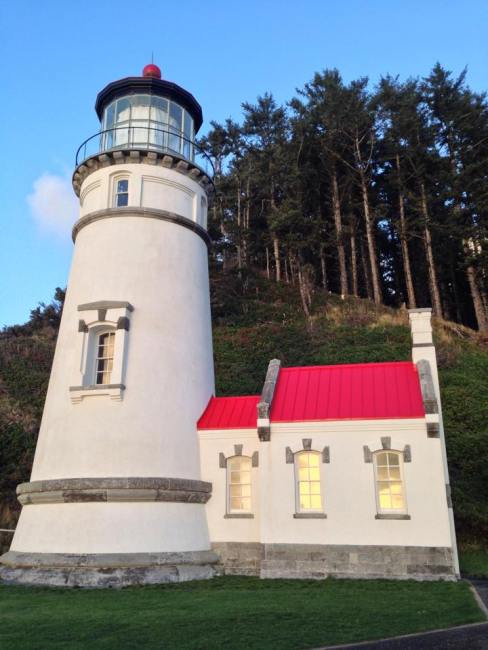 The sun was starting to set while we were up at the lighthouse!

And by the time we made it back down to the beach, it was perfect timing for the sun to go below the horizon!

We ended up driving for a few hours in the dark until we got to northern California! I was sad to miss out on the coast up there but knew we’d have plenty coming up in the next few days!

We started out early this morning to make sure we had plenty of time to get in the Redwoods and still make our way down some of Hwy 1! 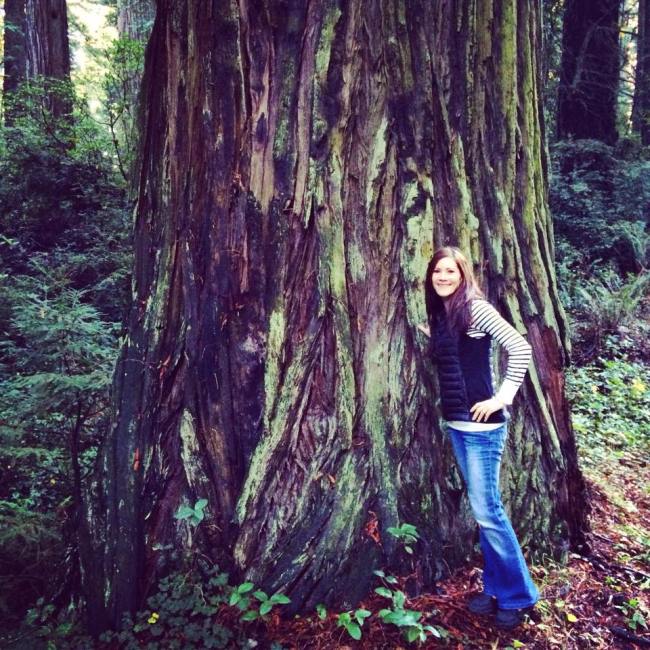 I thought this tree was big, but we ended up finding much bigger trees! At first I thought they weren’t that cool, but the bigger they got, the more awesome it was! I actually really enjoyed them and recommend making your way down Avenue of the Giants if you go into the national forest.

We spent a really long time driving through the forest and out to the ocean! But we did finally make it!

After driving the coast for about two hours and seeing a bunch of similar but awesome views, we headed inland and down to Napa! We’re spending the night in Napa so that we can do some wineries and maybe make it to San Francisco tomorrow before going down to Monterey! We’re trying to fit Vegas in for a night and we’re spending a day in Oklahoma City with my best deployment buddy, but aside from that, no set plans!