Happy Monday again! What a good last few days! Maybe it’s because I got out of the house quite a bit and felt a little bit more like myself, but it has been so nice!

Last week I hung out with Crista on Wednesday night! We went to Ponce City Market and got a quick dinner to take outside and eat. We chatted for awhile and enjoyed the weather!

Thursday night I hung out with Laura! We just went to eat at Atlanta Bread Company and then ran some errands together, as always!

Friday was a low key night, I believe. I did run to Costco with Jackson during the day and went to LA Fitness to check out the daycare area. It seems a little strange for infants. They just have a bunch of pack n plays and rock n plays to put the babies in, but they’re fabric and I don’t know how I feel about sharing those items with a bunch of random babies. But when I went, they scanned my ID card even though I said my account was on hold, which reactivated it. So they had to put it back on hold and I got an email that my account goes back on hold on May 27th! So after my refund goes back onto my AMEX (since it charged my account), I technically have gym access there till the 27th! I’m definitely going to take advantage of that!

Saturday was the start of my birthday celebration! I slept in since Jon was home and then got up and lazed around a bit! Laura picked me up at 3 to go to Painting With a Twist for my birthday! Gina and Kassie met us there! It was so much fun! I’ve only ever done that one other time and I got so ridiculously drunk and passed out as soon as I got home and I had to work the next day. I was so hungover. Totally accidental. This time I didn’t really drink and I actually liked the painting we did! The two hours went by so fast! 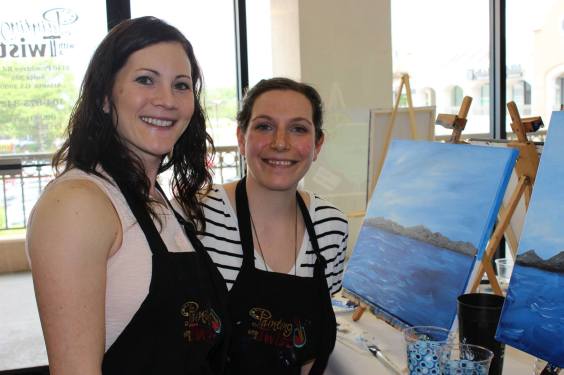 After that, Rachel met us out for dinner at El Azteca! It was a casual dinner and they were pretty slow, but I didn’t care because I got to hang out with my friends! Rachel left after dinner (she’s 31 weeks pregnant- who wants to hang out for a long time at 31 weeks?) and the rest of the girls and I went to have cake and coffee at Cafe Lapin. For the last few years, we’ve gone out and partied pretty hard for my birthday! This was definitely not nearly as extreme, haha. We ended up finishing up our night at 9pm and I came home and chilled with Jon for a little while before heading to bed!

Sunday was my birthday! I turned 30 (I’ll have to do a blog post on my 20s!) but my real celebration is next weekend with Jon! He actually went out with friends yesterday morning and I stayed home with Jackson. I actually slept until 9, but I had been up from 4:30-6:45 feeding Jackson and pumping, so it wasn’t quite the same. I got us ready and then headed to my mom and dad’s to drop Jackson off.

I headed over to Rachel’s baby shower after that. It lasted about two hours and was so fun! I love watching people open baby gifts! I also love that I have friends having babies now because I hate being the lone baby friend! Motherhood will be so much more fun when all my friends join me!

After the baby shower, I headed to my mom and dad’s to pick up Jackson and took him over to meet Laura’s mom and dad. I spent a ton of time at Laura’s house in high school and love her mom and dad! I hadn’t seen them in awhile and was actually really excited to go over and chat with them and introduce Jackson to them! Of course, Jackson was perfect and Laura’s mom loved him! He fell asleep in her arms for awhile and then I had to head out to have dinner with my parents!

After dinner, I headed home and Jon and I cleaned up. It was late and I was so tired so we hung out together on the couch while I pumped and then I went to sleep!

I slept until 9 again this morning! I normally get Jackson up by 8am for his first feed and he naps from 9-11 (because Babywise!) but I’ve been messing it all up! I set my alarm for tomorrow at 8am, haha. I was up from 5-6:30 feeding Jackson/pumping (it took me over an hour to pump this morning and I got my best pump to date- 18.75oz total!) and was so shocked that Jackson slept till 9am! And I woke him up!

I fed him and changed him and put him down for a nap a little early so I could pump and get ready to meet Crista for brunch! I met her at 11:30 at Rise n’ Dine in Decatur. Jackson was perfect again! I’m so thankful for such a good baby! He never cries and makes this transition to motherhood as easy as it could possibly be. Seriously, he is an amazing child!

Brunch with Crista was lots of fun! Over the last year or so, we really hadn’t spent as much time together! She’s always busy because she works full time and also does counseling sessions after work (she’s a therapist) so it was just hard to catch her! But lately we’ve spent way more time together and I love it! She’s definitely one of my best friends (and the only good friend I’ve made outside of high school that I have kept in touch with) and her fiancé and Jon also get along great, which is nice. She normally works regular hours but she just got back from Florida last night so she took today off. 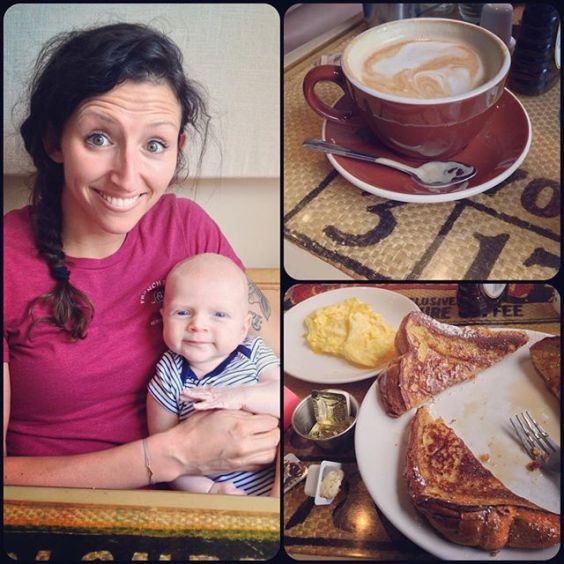 I just got home around 1:30 this afternoon and finished up pumping. I really need to clean the bathrooms and floors but I’ve been putting it off for like, two weeks now. Jackson needs to wake up to eat in a few minutes though and I really want to go to the gym tonight, so we’ll see!

In other random news: School is done! Woohoo! I successfully completed my first year of master’s with a 4.0! Only two more to go.

I’m considering getting an orange kitten from Instagram. He has to be fostered for another 4 weeks but Jon and I kind of accepted we’ll be a one cat household for awhile, so we’re a bit hesitant.

Gym time has been pretty inconsistent. As soon as I got this Groupon and started CrossFit again, Jon started getting home really late from work! But I was super sore last week and my foot hurts from a WOD that had 2 miles of running in it after not running at all since I was 14 weeks pregnant. So, I need plenty of rest anyway so my body doesn’t overdo it. Besides, I only spent $31 for the month so I don’t feel so guilty about not making it. I did tell Jon that as soon as I go back to work, I’m going back to my other CrossFit gym off ClassPass, which will be $131 a month! Not bad for unlimited CrossFit in this area (I get a discount for being a nurse and a student)! He thinks I should be saving that money and just using LA Fitness, but I feel like I should be able to spend money on hobbies that I’m 100% dedicated to! I would support all of his hobbies, but the problem is that he has a million hobbies but doesn’t do any consistently. So, I still plan on going back. My health is important and I don’t like LA Fitness enough to go that often!

That must be my only random news. Okay, time to go get Jackson! He’s starting to stir a little!