Since my last two posts have been depressing, I thought I’d aim for one that’s a little more upbeat! However, I did want to include in here how awesome my husband is. Obviously we’ve been talking about Tom and I’ve been sharing my guilt with him about not taking Tom to the vet sooner. Today he had a case up north, so on his way home, he stopped by the vet. He had actually never been there before but saw the thank you note that I wrote to the staff so he knew which clinic it was. He asked to speak to one of the vets there about Tom. I really need to do a whole separate post on my vet in case people ever search it in google because seriously, I am blown away with them. Anyway, they took Jon back to a room and Dr. Lobeck came to talk to him. He saw Tom on his second visit when they decided to keep him there last week and also called me throughout the week to update me on his status, although one of the other vets did the final visit with me. Dr. Lobeck had come in to speak with me right before putting Tom down though, just to say sorry and talk about how Tom was a medical mystery and how he thought about Tom all weekend long. Jon said that Dr. Lobeck talked to him for about 30 minutes and Jon basically told him how guilty I was feeling about not bringing Tom in earlier and wondering if all of this could have been prevented. Dr. Lobeck assured him that he thought there was something really wrong with Tom and we would have been chasing a diagnosis that we may never get, and Tom still would be sick. He thought Tom may have some sort of tumor or that something wasnt functioning how it should be. He said that I did far more for Tom than most people do for their pets and it was obvious how much we loved him. Jon told him how I had been feeling upset with Jackson for taking away from Tom, and Dr. Lobeck told him that Tom is a pet and Jackson is our baby, and a baby is more important than a pet (he also told Jon that he would have never said that to me, haha. But he has a 16 month old baby so he knows how it is). I felt so much better when Jon told me that. I had really considered calling up there just to talk to one of the vets to be reassured that going in a few weeks earlier wouldn’t have mattered and I had been wishing I would have asked that while I was there to put Tom to sleep, but I didn’t want to bother them. I’m so grateful Jon went there to talk to them and I’m even more grateful that Dr. Lobeck talked to him so in depth about Tom. That’s a busy vet and all three of the vets there took such fantastic care of Tom and made me feel like Tom was the only animal there. So, I actually am feeling much better tonight about the whole situation and am feeling a lot more like I did the right thing. And I am reminded by this whole situation how much I love my husband and how lost I would be without him.

Anyway, moving on from Tom (although, we do love our Tommy!)… Jon and I went to the Braves Home Opener on Monday night. This game was a big deal because this is the last season at Turner Field before the stadium moves outside the perimeter next year to SunTrust Park. We paid pretty big money for those tickets for a Braves game and have been looking forward to taking Jackson to his first game for awhile. Unfortunately, Monday was also the day we put Tom down, so there was a gray cloud hanging over our outing anyway. Not to mention that I have been feeling so frustrated lately about always having to put somebody else first (I can’t eat when I want to, can’t shower when I want to, can barely keep the house clean, never get schoolwork done, have to plan around his naps…)… As soon as we got there, Jackson peed on his Braves outfit because we had thrown him in a disposable for easy clean up at the game. I don’t even know how it happened. And he didn’t take any naps on Monday so he was way overtired! He was fussy at the vet and continued fussing all day. I knew he was exhausted and of course, as soon as we sat down, all the loud noises just kept stimulating him and he couldn’t sleep. So I had to feed him during the first pitch and couldn’t even watch the game. Finally I decided to just go back into the club so I could put him back in the K-tan and walk him around so he could sleep, but even that took forever and Jon wouldn’t leave us and go watch the game. He kept saying we came here as a family for Jackson’s first game and he’d rather be inside with us than out watching the game, but I really just wanted him to enjoy the game! We finally went out to a quieter outdoor handicap area and Jackson finally fell asleep. Jon went to get food and I must have looked absolutely miserable (missing Tommy) cause a lady working there came and asked me twice if I was sure I was okay. And then when she left, I did everything I could not to cry! But as soon as Jon came back, I just burst into tears. So we left… I felt really bad but Jon was totally understanding and not upset at all about leaving the game, thankfully. But I was still bummed because we have been going to the opening game since we got back together and this was Jackson’s first one and the last opener at Turner Field! 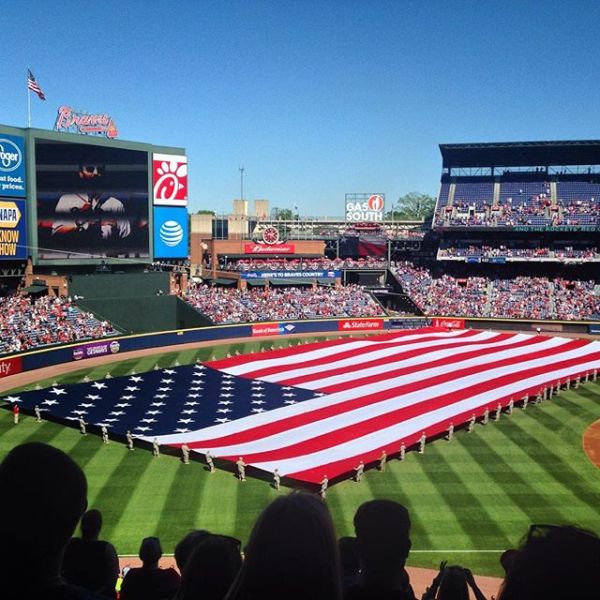 This past weekend, I went to dinner with Kassie and Laura. I was hoping for a full girls night, but Gina went to Canada and Rachel had her teeth pulled. I was still really glad Kassie and Laura were able to get together though! I really needed some girl time. We ended up trying this place super close to my house called Southbound. We ordered appetizers and I had my first drink in forever! We just hung out there and talked and shared food and had drinks. It was super low key and fun. Then we went to this outdoor ice cream stand and then ate ice cream in Kassie’s car. It sounds silly, but it reminded me so much of our high school days! Except we would have eaten at Taco Bell in high school and not a place like Southbound. But these days, we always set everything up in advance and always have a plan, so it was fun to just go with the flow and sit and chat in the car about husbands and boyfriends and babies and cats. I wish we had more nights like that. It was refreshing and definitely much needed! 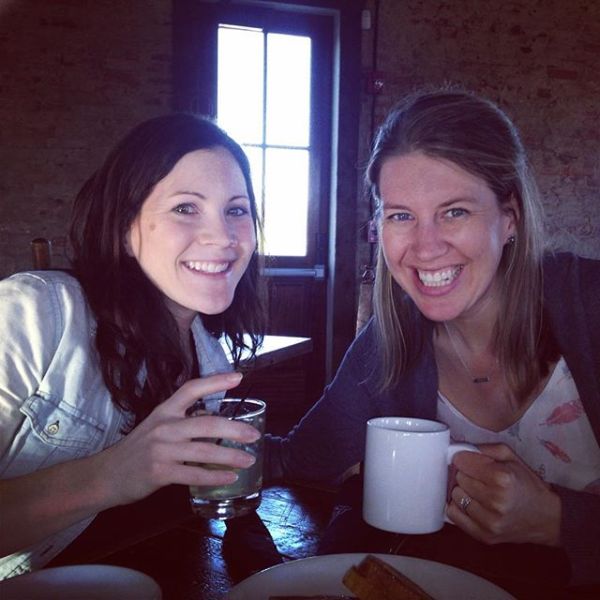 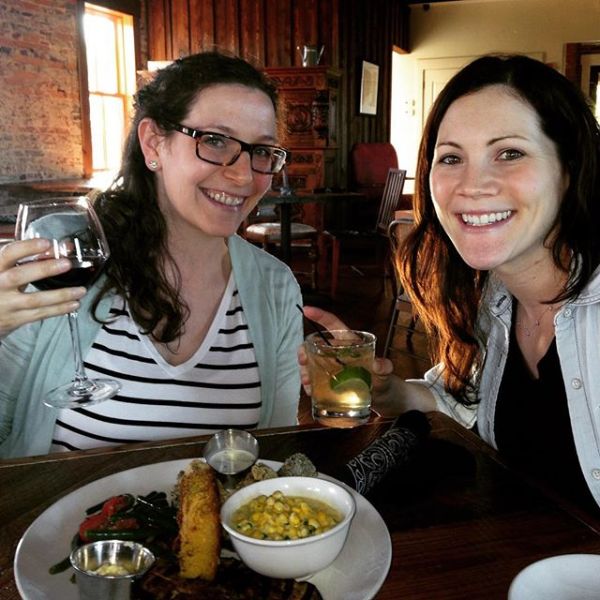 Laura and me. That creamed corn was SO good.

Not much else has been going on around here. Tomorrow I’m supposed to go on a walk with a girl who has a baby a week older than me from one of the Facebook mom groups I’m on. We were commenting on each other’s posts and she told me we had a friend in common. Turns out, she lives 3 miles from me. So I’m excited about that. We’ve had plans since last Monday but then the weather was bad and then Tom got sick and then she got sick. So, hopefully tomorrow works out! And I’m supposed to have dinner with Crista too, so I really hope that works out. I haven’t seen her in awhile and I could really use another evening out without Jackson! I’m on baby duty on Friday night since it’s Jon’s friend’s birthday, so I think I might just go hang out at my mom and dad’s. Usually by evening time, I’m so over taking care of a baby. I hand Jackson off to Jon as soon as possible when he gets home! Then his parents will be here Saturday evening to stop through on their way to some conference that his mom is going to. The rest of our weekend should be pretty boring, which I’m excited about!

I’m really excited because we have some fun things coming up. We have a wedding next weekend and my parents are going to keep Jackson overnight! I’m a little sad because I’ll miss him, but also super excited about a whole night with JUST Jon! No baby! No feedings! How fantastic! Shortly after that is mine and Jon’s weekend getaway for my 30th birthday. And then shortly after that is Gina’s bachelorette party weekend, followed by her wedding weekend. So I have lots of baby-free weekends coming up (Jon will be at all but the bachelorette party) and I am SUPER excited about it! And somewhere in there, Jackson should be getting a slot in daycare and I will finally feel more like ME again! I love Jackson, but man, I need to just be me.

I hate to sound selfish because I know I’m a mom now and Jackson should come first (and in that “I would die for him” sense, he does come first- I would die for Jackson), but I guess I am a little selfish. I want to feel like a person too and sometimes, I just need to feel like I still matter in my own life! I also want to feel like Jon and I are a married couple and not just parents together. I feel like we’ve settled more into a routine and because I have adjusted to this life some, I am staying up a little later after Jackson goes to bed so we have some time together (like right now). But it still is nothing like it used to be. Maybe after the wedding next weekend, we’ll go crazy and go to Shake Shack at 9:30pm like we did before Jackson was born. Or go have a drink and get crazy. (That will not happen- I will be way too tired.)

Alrighty, but really, now it’s almost 9:30pm and I am EXHAUSTED! I need to get some sleep in. This is my “long” stretch of sleep. I get to sleep anywhere from 2am to 3am since Jon does the last feed, and then I’m up for 2 hours and get up for good around 6:45. Goodnight everybody!

12 thoughts on “An Update That is Not (All) About Cats”