What a day! I’ve been pretty tired all day today! I woke up this morning at 8:20 to jump in the shower and head out the door to my 38 week (and 4 day) OB appointment. I was seeing a different doctor again today and the doctor last week and this week were both nice, but I really prefer my own doctor. The doctor checked me today and said my cervix is really soft but still no dilating! I know that being dilated doesn’t necessarily mean anything and she assured me that I could be 0cm and still go into active labor without any issues, but I just wanted some progress! She also mentioned again that after 40 weeks, it’s possible to induce at any time, but that it wouldn’t be required to induce me until 41 weeks. She said unless I start dilating though, induction isn’t really recommended because the cervix just isn’t ready. I had been wanting to ask her to strip my membranes today, but honestly, her checking my cervix was so uncomfortable today that I just wanted her hand out of there! She stuck her fingers through my cervix and she was pushing on the baby’s head! And she kept doing it to make sure she was feeling a head and not a butt. I could have told her I’d already been checked and he was head down, and had this entire, full grown baby turned himself completely upside down, I think I would have felt it. My next appointment is on Tuesday at 11. Thankfully, Jon is going to be able to go with me! He actually had a case come up and I told him to go to it, but his coworker told him he needs to come to the baby’s appointment instead since it’ll be our talk about induction and where to go from here! So close! 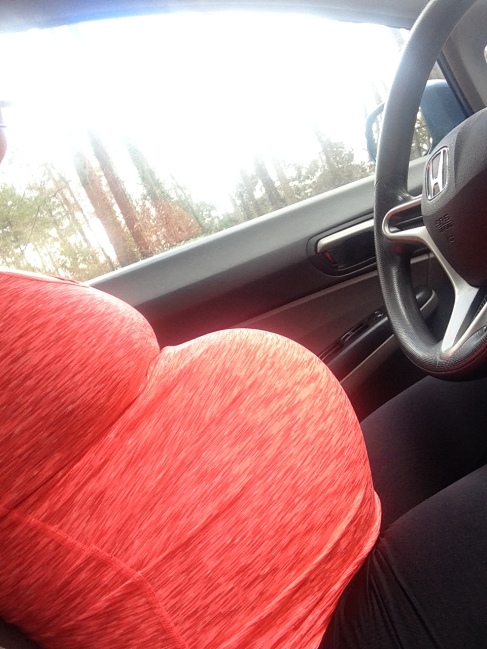 I snapped this shot when I parked my car at home after the appointment because my belly looked so weird. It was crazy from the top but I can’t capture than angle very well. It never looks how it does to me. But there’s Jackson’s big ol’ butt pushing out there! Can’t wait to see his tiny little butt in person!

I was actually going to go to the gym today, but then I came home and was starving so I ate while I cuddled Tom and watched TV. Then I took a nap and it was so hard to get up off the couch. And I’m still exhausted. I could seriously sleep forever. Not sure what is going on! Jon got home shortly after my nap and I’ve been hanging out with him and working on some schoolwork, but it’ll probably be a low key night around here, as they have been.

Yesterday I think I started nesting! Or maybe I was just feeling productive for one day because I sure haven’t been feeling productive today! At least I’ve managed to keep our house clean though, which is a pretty big deal in itself after how the last 38 weeks have gone! Jon and I finally got stuff done with the baby’s room! We are still waiting for the glider, which is actually supposed to arrive today according to Rooms to Go, but our porch is still empty so I’m not really sure where it is… 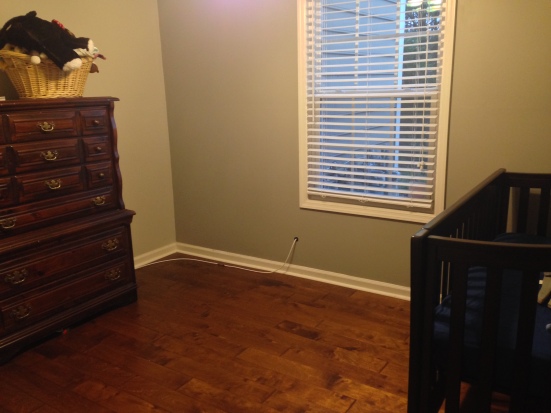 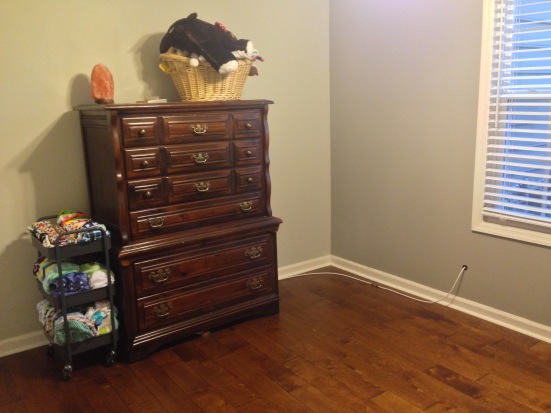 I’ll have to get some better ones on my real camera eventually, but this is a quick shot. Those are all my cloth diapers by the dresser! I think I was mostly excited about organizing my diapers, honestly. The glider is going to go next to the dresser over in that corner. There’s more room there than it looks like in this photo. And then we just have to hang some stuff up over the crib and we’ll be done for now. We aren’t doing a changing table because we already had that dresser and didn’t want to spend the money on it, and I’m fine with using waterproof pads on a couch or bed to change him. Or the floor. I don’t really care.

Tom definitely had a blast running around yesterday with all the boxes everywhere. Jon and I put together a bunch of the baby stuff to get it all ready and I’m definitely feeling more prepared. Now, one of these days I’ll pack a bag for the hospital! 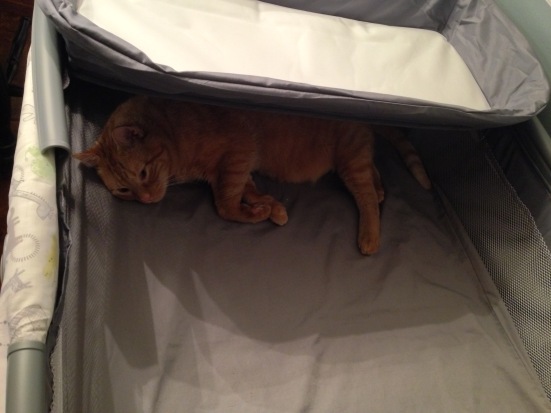 Tom is sleeping there right now. In the pack n’ play. I wonder if he knows that’s not a bed for him.

Jon and I took a look at our taxes last night too. I think we may have them professionally filed, but Jon entered our information in and it looks like we’ll owe about $4000! AH! He changed his deductions for a big call weekend to 12 and forgot to change it back, and then he was a 1099 employee for awhile. We have about 1/4 of that saved up in a separate account because we knew he’d owe on his 1099 income, but still. Wow. I’ve never owed before and definitely not that much. Isn’t it depressing to be a middle class family? I’m hoping if we have them done professionally, they can find a way to decrease that number. I’m definitely feeling poor knowing I’ll be out of work (unpaid) for awhile with Jackson! I’m already thinking about how I can work more over the summer when I’m not in school so we can save up. We definitely have money in savings for stuff like this, but we want to move out of our condo! At this rate, we’ll be in this tiny condo for the rest of our lives. Good thing I like the location so much!

Anyway, I’m off to get some more school stuff done for the evening! I have some discussion postings due tonight and a literature search assignment I need to work on. I just finished up a paper today and am waiting for Jon to proof read it. Ugh, grad school. I can’t believe I still have two years left of this after this semester! I’m so glad we don’t have classes over the summer cause I already need a break!

4 thoughts on “38 Week Appointment and Taxes”