What a week. For some reason, I thought I would be able to get all kinds of schoolwork done this week. That hasn’t happened.

After my family left on Sunday, Jon and I decided to go out for our 2 year anniversary! (After he told me he was going to go watch football with Billy and I was like, “Um, it’s our TWO YEAR ANNIVERSARY! You should WANT to spend this evening with your WIFE!”) Since we were still at my parent’s house, he decided to head home to bring all our gifts and I figured it’d be easier to just shower there. When I finally went to leave, my car wouldn’t start! So Jon had to drive all the way back there to jump my car and then he had to go buy a new battery for it so he could replace that before we could even go anywhere! I’m definitely thankful to be married so I have a husband to do those things for me, but what a pain.

We finally made it home, where I decided to try and look somewhat decent. Except I still wore leggings and one of my only maternity shirts that I own, but I put on real boots instead of my “slipper” boots, so at least I tried. And I wore my hair down. Then our two year anniversary looked like this: 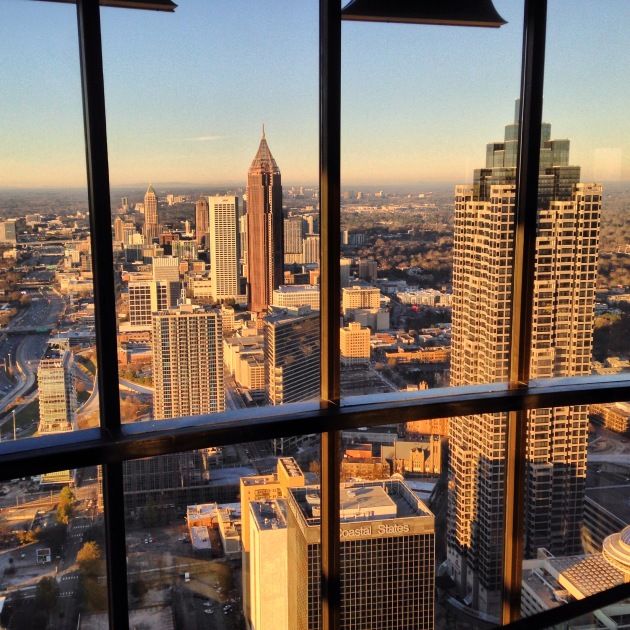 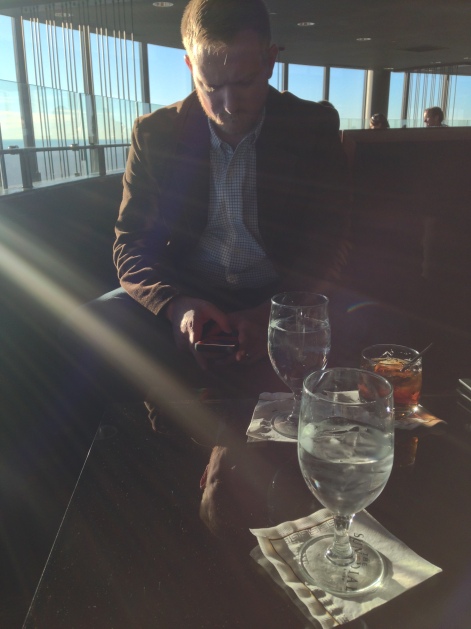 We went to the Sundial Cafe at the top of the Westin. I love going there and we were planning on appetizers and “drinks.” Except none of the appetizers looked good. Now, normally we go to the Melting Pot for our anniversaries since it’s a fun experience and the food is good, but this year, we just didn’t want to spend over $100 for a meal. I decided that since we weren’t going to eat at the Sundial, we should go somewhere new! So we literally spent 25 minutes looking at Yelp/Scoutmob, trying to figure out where to eat, and all I wanted was Willy’s (like, the cheap burrito place similar to Moe’s). I have no idea why I wanted Willy’s since I haven’t been in years and have no idea what they even have to eat, but that was what I wanted. Except it was closed. So we ended up just going to Sushi Nami which is one of our regular date spots (although not lately, since we haven’t been going on dates much these days) and spending like, $70 on dinner anyway, plus our tab from the Sundial, so we should have just had the Melting Pot.

Monday was an errand running day. But I did get to wear another one of my new workout shirts that actually covers my whole belly! 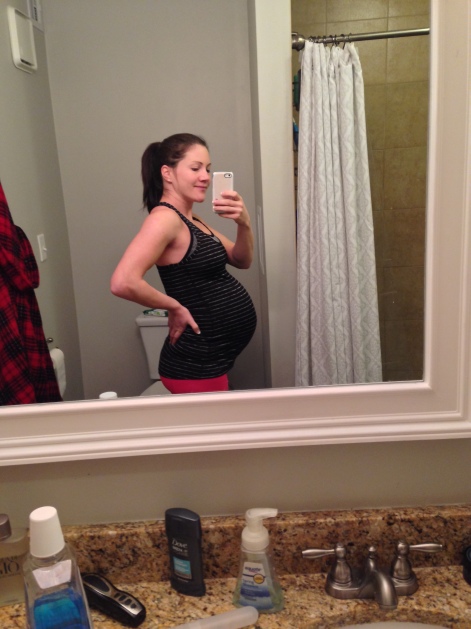 I also LOVE these shirts! I got it at Marshall’s for $10 and they’re originally $45-$55! It’s 90 Degrees by Reflex. They had a ton there! I wanted to buy some XS so I could still wear them after the baby, but I have enough workout clothes in my regular size, so I refrained. Also, I was wearing a new medium sports bra and I need to buy another one! These girls just don’t want to fit in a small anymore (I usually wear XS but I already sized up once) and the medium felt so nice! My cleavage wasn’t up to my neck and my boobs weren’t squished into my armpits! So I might have to invest in just one more bra that actually fits!

My workout Monday was kind of rough. I did a few minutes on the elliptical and then did some walking lunges with 10# in each hand and some squats while holding the weights. But my back just started really killing me. I was in so much pain walking over to foam roll my back out cause my lower back was spasming! Awful. And it is so frustrating to feel good other than that (my workouts feel much better than a few weeks ago!) but not be able to do anything because of the back pain!

Anyway, the rest of Monday was spent running errands and working on school stuff.

Tuesday I had an OB appointment. I’m so glad that when I told my OB that she was all booked up through the rest of my pregnancy that she told me to fit an appointment in whenever I could! So I get to see her next time and again at my 40 week appointment, which I am super happy about. I definitely want to see her for that last one in case we need to talk about induction, since I’ve been seeing her for years now. Jackson was the same and we still did nothing at the appointment.

I also went to have lunch with Crista on Tuesday. Her grandpa is really sick and probably nearing the end of his life, so we’ve been talking about that a lot lately. I’m glad to have some medical knowledge (especially about heart failure) to share and I’m also glad that we’ve had some more time together lately (she’s on grand jury duty so on her jury duty days, she’s out by 1:30).

For some reason, I decided on Tuesday that Jon and I had to start organizing for the baby. Maybe because our nursery looked like this: 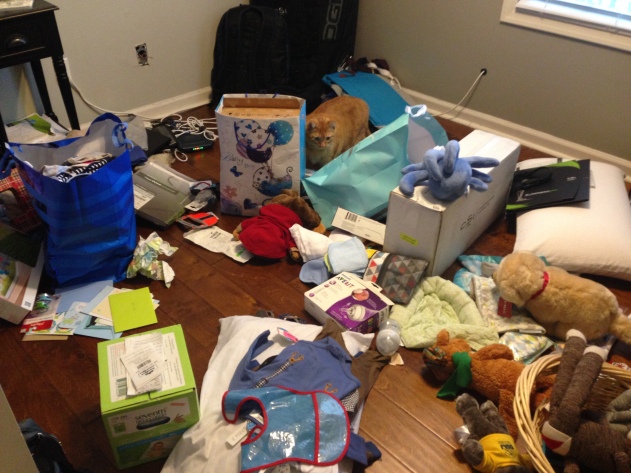 Just to be clear, the room doesn’t normally look like that. We moved the bed to my parent’s house last week and then brought all the baby stuff home so it ended up looking like a tornado hit. We went to Babies R’ Us and exchanged some gifts and bought a ton of other stuff that hadn’t been purchased for us yet! We dropped all that off and then went to Lowe’s to get some shelving for the closet. I couldn’t even organize any of the stuff in the bedroom because we literally had nowhere to put it! By the time we got the shelf put together, it was 10pm and I just had to get stuff organized! 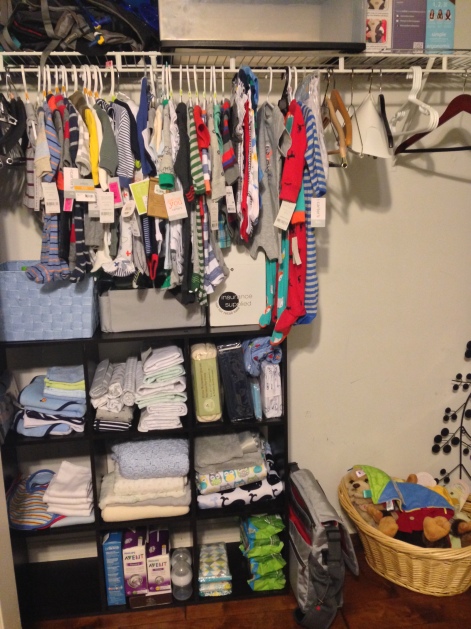 I got the closet done at least! I couldn’t decide what to do about clothes since our hand-me-downs have almost filled up our dresser, so I decided to leave the new clothes hanging and hand-me-downs can stay in the dresser.

I was obviously exhausted Wednesday at work since I stayed up working so hard on Jackson’s closet! So no gym Wednesday! Jon and I lazed around a bit and then finally, I decided we needed to try and clean up the rest of the house. We got the crib put together and attempted to clean, but the whole house is just such a disaster right now that it’s overwhelming! We just keep bringing more stuff home or taking more clothes out of the dryer and I just don’t want to clean! 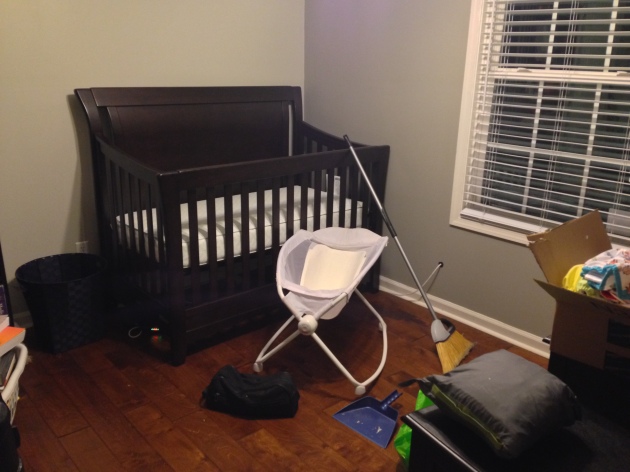 So, at least we got some of the stuff in the baby’s room cleaned up. We have to take a bookshelf apart in there and get rid of the books and take some nightstands to my mom and dad’s, but overall, it’s not too bad! The rest of our house resembles the first picture of Jackson’s room though. Seriously. It’s that bad. Except for our kitchen, which I have managed to keep clean for the most part. But the rest will take a long time to clean up.

Last night I was in bed by 9. #oldpregnantlady

Today I worked from 7-11 in the ER, but at 11 when I was about to leave, a 3 year old crashed and all the other nurses went to work on that kid while I covered 11 other patients. I didn’t leave till noon and Jon asked me to get his dry cleaning for him to go out of town. I did that, watched him pack for about 20 minutes, and then he left. I was super excited about napping on the couch for some reason, so I curled up as soon as he left and got to snoozing. I got 20 minutes of sleep before Jon called and asked me to see if his backpack and suitcase were in the parking lot of our condo. And they were. I offered to take them down to the airport since I knew he’d miss his flight if he came all the way back home and that would look pretty bad since he’s accompanying a doctor to an educational conference on his product… So instead of sleeping or the gym, I spent an hour in the car dropping off his luggage and dying to pee, but I’m in pajamas and my shirt literally only covers 1/2 my belly so I couldn’t even stop anywhere to go. I mean, who even leaves their suitcases in the parking lot anyway?!?! Only him. But I’m just grateful that he works so hard to make enough money that I can just work my 8 days a month (although I do work more usually) and will be able to stay home (unpaid) with our baby for a little while. So I was glad to drive it all the way to the airport.

Also, while driving there, I watched probably 20-30 planes take off in just that few minutes. It’s just ridiculous how many planes leave Atlanta.

So now I’m home from that fun adventure. I just finished my lunch since I was seriously starving while I was headed to the airport and now I can either work on school stuff, clean the house, or work out. And I will probably choose cleaning and just go to the gym tomorrow. Honestly, my workouts in general just suck so much now that I feel like there isn’t much benefit in going, other than to keep me in the habit of going for as long as possible so it’s easier to get into when Jackson is born. So I might as well get my other stuff done since cleaning up this house isn’t going to be easy and I can only do so much at once before my back starts killing me and I have to take a really long break. This back pain is insane and it is making me really excited to deliver Jackson so it can just stop hurting!

Time to go be productive. Sorry this was so long and boring. Apparently I had a lot to say today.

7 thoughts on “Anniversaries, Nesting, and Other Life Happenings”