Happy Tuesday! I’ve had a great few days off this past weekend! To start with, Jon and I finally booked a trip! Actually, he booked it because I got some serious cold feet about flying! I deal with flying internationally because the planes are so big for international flights so they aren’t as scary (the take off is a lot more smooth in the huge planes) and I never have a layover. But these ones? It’s all on the smaller planes with a layover and I can’t justify scaring myself like that to stay in the US. I think I might have to take Ambien to fly. I figure the baby is big enough at this point that it should be fine to take twice. Ah, already so much flight anxiety! It just gets worse and worse the older I get!

Anyway, so we’re going to Lake Tahoe! No time to plan a trip to Costa Rica! Let’s be real- we’re leaving NEXT FRIDAY! I can’t plan a whole trip in that short period of time! So we’re just going to stay at a Marriott that has great reviews and enjoy a snowy, relaxing, winter Tahoe wonderland! I’m pretty excited about it! Although less excited about the fact that none of my clothes fit! I’m going to borrow a jacket from Gina if my pea coat doesn’t fit since my North Face jacket leaves about 4″ of my belly exposed now… And then I’ll probably be wearing dirty clothes while we’re there since I can’t wash enough. Pregnancy problems.

For my weekend recap! I went to my MissFits class Friday morning! Working out is definitely getting harder. I did an air squat yesterday and jumped up in pain cause I guess I squished my belly so much! I had to slowly warm up so that it was much more comfortable and then it was totally fine. But my uterus is about 2″ below my rib cage in the center (my xiphoid process, for you medical people) now, so that thing gets up in there when I bend over and work out.

Anyway, the rest of Friday was spent doing homework and then I went to a Stock the Bar party at our friend Rachel’s house. It was alright, but Gina and I met Kassie there and it was a lot of Kassie and Rachel’s coworkers and it was kind of awkward since we didn’t really know anybody!

Saturday morning I went to one of my favorite classes, Cardio Muscle Mix. I’ll just be honest in saying that an hour is really getting to be too long for me to work out! CrossFit is an hour, but we take a lot more breaks. CMM is consistent and it really wears me out. Jon and I ended up taking my car in to get checked (my tire was leaking) and having breakfast together, and then I laid on the couch all afternoon! We got up in time to finish our baby registry and then we went downtown at 10pm for Crista and Billy’s engagement party! (By the way, this new WordPress media thing is confusing- I don’t know if these images will be huge.) 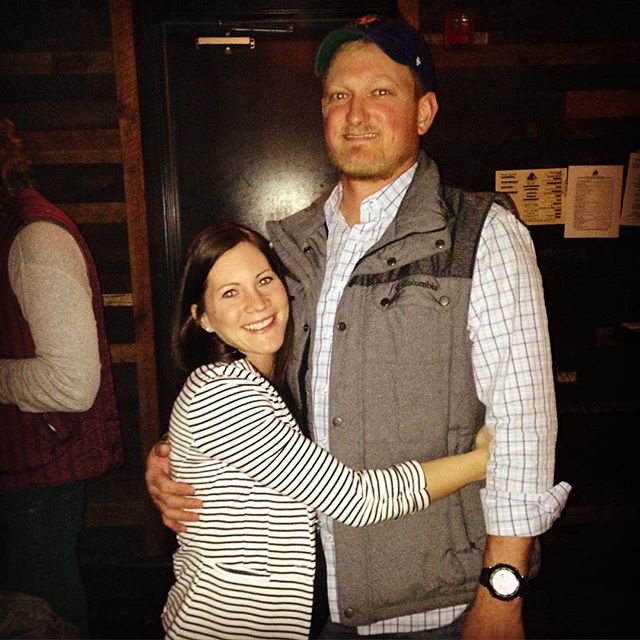 That’s the first picture of myself where my face looks pregnant too! Anyway, I was super excited for Crista and Billy! We all knew what this party was for, but somehow Crista managed never to pick up on the fact that Billy was proposing that night (she thought he was going to over Thanksgiving). So, definitely a fun time! We even stayed out till 1:30am which is way late for me and took until this morning to recover from! And I didn’t even drink, obviously!

Sunday morning, Jon and I got up way too early and ran errands and went to my mom and dad’s house to hang out for a bit. We prepped some food to take to our Friendsgiving that evening! Always good to see my mom and dad! I’m actually excited about celebrating Thanksgiving with them this week, although Jon will be in Florida for it.

Our Friendsgiving was over at Andrew’s new house. Our friends Justin and Andreina came with their two kids, and then Andrew had the girl he’s dating come. Just with our little group, we had a huge spread of delicious food!

This will definitely have to be a new thing on the holidays cause I love eating and it was just a lot of fun to get everybody together! Andrew did a great job hosting it too and setting up the table!

Unfortunately, that night, I felt terrible. I think I really need to cut out grains and sugar again! I’ve let my diet go since getting pregnant (that is my diet in general- not some weight loss diet) and paired with the indigestion I have, it’s just a really bad mix. So I had a rough Sunday night and barely slept, making it two sleepless nights in a row!

Monday morning I went in to work for 4 hours for incentive pay and felt like a truck ran over me. Also, everybody else apparently could notice that I “look pregnant everywhere else now, too.” So it’s not in my head! But I got paid a boatload of money and had 3 patients total that I did absolutely nothing with. (Well, I suctioned a baby’s nose. That was it.)

I left to go to CrossFit and had a good workout, or as good as it gets these days, anyway. I ran errands yesterday afternoon and then showered and got ready for craft night at Gina’s!

I got to Gina’s early and my back was hurting a ton, so I mostly laid on the couch (laying is the only position that makes it better) and talked to her till Kassie got there. Once Kassie arrived, I just watched them make pinecone wreaths since I didn’t feel like leaning over a table.

They ran out of pinecones, so they need to make them bigger still! But they looked good! As always, it was a fun night hanging out with them and I’m still so glad we’ve been spending so much more time together lately! We’re hanging out next week too for a Christmas get together! We’re going to bake and watch Christmas movies! I’m excited!

This morning I was on call from 7-3p and I was told yesterday that I’d for sure be called in from 11-3 and 50/50 at 7a. I was so stinkin’ happy when Jon woke me up to ask why I wasn’t at work cause I realized I wasn’t called in for 7am! Then I called at 9am and the supervisor said they didn’t need me at 11 either! Guess they’re having a good day over there!

Unfortunately, my paper writing/gym day is taking a bit of a hit here cause Tom hasn’t been eating and has had some frothy vomit, so I’m about to get changed and take him to the vet to drop some hundos, I’m sure. The vet is never, ever cheap! And this one is definitely not a cheap vet, but they’re worth it (I also drive 30 minutes to get there while passing many other vets and listening to Tom sing me the song of his people the whole way). I have to get some stuff together after that for Gilli’s baby shower at work tonight. I had planned on baking cupcakes, but time escaped me! Woops! I need to go to a bunch of places for stuff like decorations and a cake (Publix) and then some trays of veggies (Costco). So it’ll be a busy afternoon. And I need to head out before traffic gets too awful, which over the holidays in Atlanta is at like, 2pm (seriously, it was SO bad yesterday all day long).

Alrighty, time to go get changed or I’ll be late for Tom’s vet visit!

5 thoughts on “Fun Weekend Off Work!”