Hey-o. Happy Wednesday. It’s another dreary day in Atlanta. Atlanta really has way too many rainy days, but I’ve actually been enjoying the rain this time around. Maybe because I need to get schoolwork done and it’s easier to sit inside on the computer for hours on end when it’s drizzling out. It was also in the 50s yesterday and I was really excited about it. I’m kind of excited about winter in general this year, despite the fact that winters are usually harder for me mood-wise.

Anyway, yesterday was a work day, as most Tuesdays and Thursdays are. (In case you all aren’t tracking my schedule, I pretty much only work on Tuesdays, Thursdays, and then 2-3 weekends per month.) I was at my new(er) job and was so happy to be over on the PCU side instead of tele. While I stayed busy, that side just seems to be a lot more calm and quiet. That’s my jam at work these days- calm and quiet!

I got home and caught up on some TV. I had planned on working on school stuff, but really, my brain was over thinking by the end of my day. So TV it was. Jon got home from a work trip last night so I hung out with him for a bit, but he didn’t get in till almost 10pm. He fell asleep early, so I read part of Moloka’i and then called it a night.

I got out of bed for a 10am Elite Edge workout this morning. Wednesdays are arms, thankfully, since my legs are beat from Mondays workout. I’m not really tired, but my body definitely is feeling drained again. I made it through the workout with a lot of breaks and then went grocery shopping, but by the time I got home, I was just beat. My body doesn’t even want to stand. Oh, being pregnant… I really look forward to having some energy back one day, but I doubt it’ll be with a newborn. I have a feeling adjusting to early morning workouts (I’ll probably try to go before Jon leaves for work most days) after staying up feeding a baby at night is going to be even more difficult.

Random side note: I always work out in my spandex Nike booty shorts, so a lot of times I hop into my car in those and then when I get to the store after the gym, I throw my pants on when I stand up outside of my car (I’m usually too hot to do it before I leave). The last two times I did that, old men have commented on how they thought I was taking my clothes off. Old men are creepy. Or maybe that’s just what I get for putting my clothes on outside of my car. Who knows.

I bought the most random stuff today, including three new types of tea. One of them was The Republic of Tea’s pumpkin spice tea, which I’m enjoying right now. I also bought a ton of fruit that I hope I can eat before it goes bad. And salami. Because I just so happen to love salami. Also, Whole Foods started selling Traderspoint Creamery yogurt (they sell a yogurt drink that I like too, but I don’t usually buy it) and I love it. I usually stick with Noosa, but I really want my dairy to be grassfed. I haven’t found any grassfed yogurts that I like though, until this one! The raspberry is so good! If you live in Indiana, they even have a restaurant. I’m so jealous. I wish Atlanta had such awesome grassfed farms. (We do have some up north, but not super close, and none that sell such awesome stuff.)

Tonight I’m going to be meeting up with Crista for what I’m sure will be a fairly short dinner. I’m still glad to get to see her for a little while though! It’s been too long! Up until then, I’ll probably be trying to make a dent on my paper since I have so many assignments coming up that I need to get started on! And since Jon and I want to go on vacation in December, I have a ton of work days coming up in November.

Also, in case you guys want to know how hard Tom makes it to get work done: 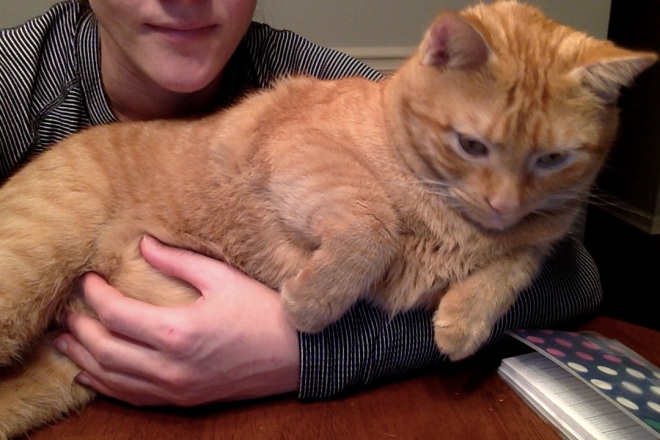 He always wants to lay like this, purr loudly, and make happy paws all over my keyboard. I push him down and he comes back up and the process repeats about fifty times before I give up and just work around him.

And there he was last night, demanding my attention while I tried to sit on the couch with my laptop in my lap. He wasn’t having it. He is one spoiled cat. (Also, his diet is clearly not working. I’m pretty sure he hasn’t lost a pound and all he does is stick his paws up into his automatic feeder trying to scoop food out of it all day long.)