Well, I should be at a work class, but it was cancelled due to low enrollment! So here I am!

It was a good weekend at work (in the ER) for once! We were busy but I was with the kids the whole time and had all really cute little kids or polite teens! That almost never happens! I had so many yes ma’ams this weekend that I was shocked! Nice change though for sure. I went to bed super early both nights because growing a baby is tiring and I can’t get enough sleep.

I did have a chance to look at flights to Paris in December and they’re only 60,000 points! Unfortunately, we just spent all 120,000 points we had going to Amsterdam, but we could get one trip on SkyMiles so I’m incredibly tempted to book a trip to Paris in December! I don’t know if it would work with Jon’s new job, but I’m having a total pre-baby crisis and feel the need to go on just ONE MORE TRIP! I know that financially, it wouldn’t be the most responsible with the whole thousands of dollars going to grad school in December and a delivery in March, plus I don’t get paid for maternity leave… But, but, but, it could be our last trip 😦 I just need to go to Paris before Jackson is born! And Jon is dragging his feet on Europe in December anyway (most of my trips have been winter trips to Europe and I prefer them that way- way less crowded).

Friday and Monday were mostly spent working on a grad school paper. I’m already so over school. I think I have two more big papers to go after this one before the semester ends and it cannot come fast enough.

I did make it to the gym on Monday! I wasn’t really feeling it, but I went to Elite Edge for a leg workout (Mondays is always legs).  I always love their leg days, but I think my lower back pain is causing some weird butt and hip pain so the workout got pretty uncomfortable. Also, I was literally so hungry that I almost left the gym in the middle. I even ate beforehand too. I felt totally depleted of all energy being that I was that hungry. So I did not enjoy my workout, but at least I went.

Last night was Bookanalia (the book club that I just joined). I wanted to take some lady fingers from my all time favorite baklava shop (it’s really a bakery, but I only love the baklava and lady fingers). I stopped in and the woman there asked if I was pregnant! She has seen me before but it’s been awhile, so I guess I look pregnant now! Not just fat! She’s also Greek, so she may be more inclined to ask than an American, cause I feel like Americans know not to ask questionably pregnant women if they are actually pregnant. 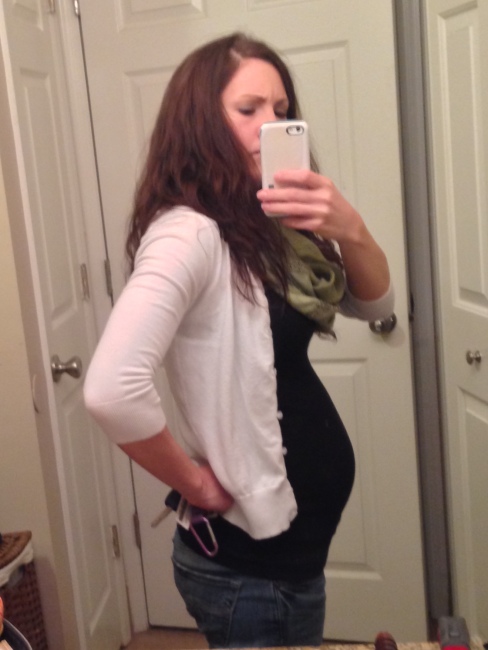 Gina ended up not going to book club and neither did one of the other girls, so it was just Kassie, Rachel, Jessica, and me. Two of us only read half the book (it wasn’t good- The Westing Game) so we really spent the whole time eating chili and talking about Rachel’s new house and babies and telling stories to each other. It was a fantastic evening! We sat on the porch with candles lit and I just loved every minute of it! I want a nice, big screened in porch so bad! I’m dying for a new house! Too bad we still can’t afford one (but we would probably be more on track had I not spent thousands of dollars on trips to Europe and want to do it again).

This morning I wanted to go to LA Fitness for a light workout since my back pain isn’t getting any better and I just waned some easy activity, but I thought I’d need to finish up my paper since I have an eye appointment in a little while and need to make it out to the clinic tonight to volunteer. Turns out, I could have worked out since my paper isn’t taking me long, but I didn’t know that ahead of time. I may try to sneak in some elliptical tonight after the clinic if I can. As long as I’m not starving, but it’s likely that I will be (I ate all day long yesterday). 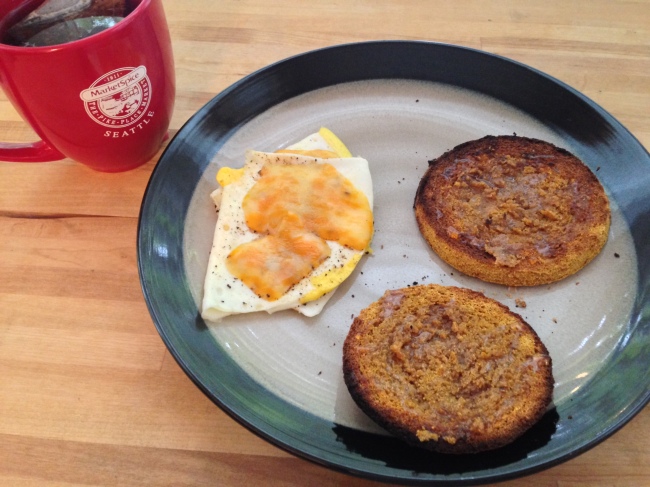 I just finished up a nice brunch with these English muffins that I now love! I’m going to try some non-pumpkin ones for egg sandwiches, but I need almond flour first. (I’m using super old coconut flour and baking powder for the pumpkin ones, but hey, they work.) I added maple syrup and tons of cinnamon to these ones today and then topped them with butter and honey. Amazing. It’s a really nice alternative to bread since I’m really just craving bread products lately. I don’t get bloated with eating them! Ah, if only I still ate Paleo, I wouldn’t even remember what being bloated feels like. Also, I bought Chai tea (note my Seattle coffee cup- I’m also having serious travel nursing withdrawals right now and just want to go back to Portland!) at Whole Foods and have been drinking that instead of coffee. I figure the antioxidants are good for me and it doesn’t make me feel disgusting like coffee does.

I hope you all have a good day! I’m off again tomorrow but may pick up 3-7 since they have needs, then I work Thursday and Friday it’s off to the cabin with Jon! Can’t wait to have a relaxing cabin weekend with him! Especially cause it’s FALL!