Jon and I placed our first Blue Apron order the other week. I was pretty excited because we got two meals free, which come to find out, meant one meal for two servings (aka: “two” meals). So we spent $40 instead of the usual $60 for three meals for two people.

When my box arrived, I brought it inside right away. Upon opening it, I realized my refrigerator pack wasn’t completely sealed at the top and that most of the food on the top of the pack wasn’t actually cold anymore. All the meats were still cold though so I figured it was fine. I also noticed that despite their “recyclable” packaging, it creates a ton of waste! The ice packs aren’t actually recyclable unless you reuse them, and while I recycled the box, most of the packaging was not easy to recycle. I don’t really like producing a lot of waste, so that was a downfall for me.

We received the following three meals:

We started with the Thai Chicken burgers. They were easy to make but definitely took over the 10 minutes of prep time that Blue Apron claims they take. It took a normal amount of time for a meal prep, but they should be more realistic and increase that time to 30 minutes. I even had Jon helping me and it was nowhere close to 10 minutes even with a team! I loved the Thai Chicken Burgers though! The hoisin mayo and cilantro won me over! Jon wasn’t a fan of them, so I actually ate one that night and one the next day. Delicious. I was excited for my other meals! 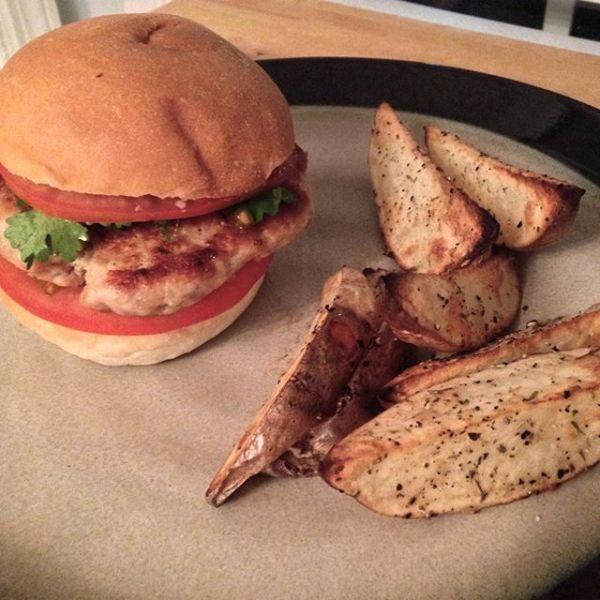 Night two was seared steak. I wasn’t too hopeful for this one because Jon and I buy really nice steaks when we do eat steak, so we have no connective tissue at all in our steaks. Cheap steaks usually kind of gross both of us out. Also, potatoes again? You would think they could have thrown some broccoli in there or something instead of having potatoes 2/3 nights, especially at $20 per meal (also after viewing the upcoming meals on their website, this seems to be typical for them- LOTS of potatoes)! After preparing this meal (again, longer than 10 minutes with two people), we sat down to eat. Jon couldn’t even eat any of his steak because there was so much connective tissue in it, and I got a few bites into mine before getting connective tissue. The sauce was only okay, so I ate the potatoes and that was it.

Although I never eat pasta dishes anymore and I’ve notice that 1/3 meals per week on Blue Apron seem to be a pasta meal (another downfall for me), I was looking forward to this one since I was starving by the time I got home from work! Keep in mind, this was Sunday night and I got my box on Friday. I took my squash out of the fridge and it had already gone bad! I was disappointed because again, $20 per meal? I buy a lot of squash and they never go bad that quickly. Had it been time sensitive to eat that one first, that should be somewhere in the directions. I decided to make it without the squash. In the directions for this meal, it said to make the sauce mixing the garlic paste and ricotta. Well, no garlic paste was included on the ingredient list, nor was it in our package. So we just used the cheese. This meal was a huge disappointment. Andrew was also over for dinner and none of us enjoyed this meal at all. It was extremely plain and had hardly any flavor at all.

Overall, we were not impressed. For $60, we could easily buy ingredients for much more enjoyable meals. While the prep for all the meals was easy to do and it was nice to try something new, we had a pretty poor first experience. I was going to try another set of meals in a few weeks, but the week I wanted to try had steaks again, and neither of us are willing to redo that steak experience. Jon recommended canceling Blue Apron entirely because he was far less than impressed than I was. Not sure what exactly we’ll do. I just know I’m not exactly hopeful for any future meals with them and it seems like a waste of money.