Happy 4th of July! I figured I’d do some catching up on the week since my blog posts have been a little more sporadic lately!

Jon and I went to Trivia on Wednesday night since Kickball was rained out! I’m still not totally feeling Kickball and am wondering why I decided I should venture out and try to meet new people. Besides, now that I’m pregnant, I feel like I should probably start trying to make more mom friends and less late 20s-early 30s people who are still partiers. Makes sense. I don’t party anyway. Trivia was fun, as usual, but it ended up lasting over 45 minutes longer than usual and then Jon and I just decided to head out at 9:45. I don’t even understand how you can make the exact same number of questions and songs take that much more time!

Thursday was an 11-7 workday! I haven’t gone in at 11 in quite awhile, but since I’m sleeping so bad in early pregnancy, I was so pumped. I had planned on getting up at 8 for the gym, but after hardly sleeping, that didn’t happen! Instead, I got up early to pack to spend the night at my mom and dad’s after work!

I got my ass handed to me at work that day. I was also really rude to a nurse I barely ever work with. Then I apologized profusely to the poor woman and told her how I’m pregnant and sleep about 4 hours a night total. And then I apologized about 10 more times before I left work. My patience is shot these days. And I really hate being rude to people but I seriously just feel like I can’t even help it right now. I’m trying so hard to reel it in now!

That night, I slept so good at my mom and dad’s! I felt like a brand new woman, although still tired, because I hear that’s what happens. But a full 6 hours of sleep! I felt like I won the lottery! I worked 7-3 on Friday, and then my supervisor let me go home 4 hours early. While I should never go home from work early since I don’t get maternity leave and need to save up, it was really hard to resist.

I had completely forgotten that Laura and I had plans after I got off work, but luckily, she had texted me right at 3 asking about getting together. She was off (you know, regular people are off work for the holidays), so we met up at my house. We ended up going to Costco to get cat food and then wanted to get sushi, but they were closed for FIVE days for the 4th! WTF. So we got tapas instead and I had the best freaking chicken empanada ever. Like, holy moly, it was delicious. Then we got ice cream. Of course. Because I eat ice cream like it’s my job.

I went back to my parent’s house after and hung out with my sister and nephew for a few hours. I slept there again last night, although my night of sleep was not nearly as restful as the night before. I was really hoping their house would be my good luck sleep charm and I’d just be moving in there till this insomnia passes, but now I’m not so sure.

I went to the gym this morning around 9. I hate going to other gyms (I use LA Fitness, which is a chain) because I don’t know where everything is, but I still got in a good workout. I usually max out now at about 40 minutes of gym time before I start feeling a bit nauseated since I tend to go on an empty stomach, but that feels like plenty of gym time for me right now.

I had breakfast over at my parent’s house and then showered and headed to Starbuck’s to meet up with Kassie for some wedding planning fun. We spent about three hours wedding planning and it was a lot of fun, actually. Planning her wedding is way more fun than planning mine was! Also, she was so excited about being an aunt soon! She has been really hoping I’d get pregnant soon and her reaction totally lived up to my expectations! It’s so awesome to be friends with people I’ve known for 15 years! I love having these people by my side for stuff like this and I really can’t wait till they all start having babies (but I think it’ll be a few more years for them!).

I came home after Starbuck’s, ate lunch, and then curled up in bed for awhile. Jon, Andrew (his friend), and I are going to head downtown soon to hang out with Crista and Billy for some fireworks from a rooftop tonight, so hopefully it’ll be fun. And hopefully the weather stays clear! I plan on sleeping at our house tonight and then just going over to my parent’s for dinner with Jon tomorrow night since Annie and Patrick are still in town. But, I plan on sleeping in (if my body lets me) and then getting in a longer gym session if I can.

In the last bit of news, I am even more excited about ClassPass now! They’ve signed with a CrossFit gym just across the street from my house, which is so awesome! They only offer noon classes and early morning classes, but I love noon WODs! Also, they have a few more new HIIT type places close to home that I can’t wait to try! While I love LA Fitness at times, I also really miss my HIIT! And most of the gyms on there are a little less extreme than regular CrossFit, but I’ve really been missing regular old CrossFit lately! So, I can’t wait to try this new CrossFit class on Wednesday afternoon! I figure once the baby comes, I’ll drop my ClassPass since childcare will be hard to come by at these studios, so I’m going to live it up for the next 34 weeks!

Happy Wednesday! I’ve been off work for the last few days, thankfully! I haven’t been sleeping well since finding out I’m pregnant, despite being exhausted. I think it’s the changes in hormones and also feeling like my boobs weigh 10,000lbs.

My sister came in town last week, so pretty much all of my time off work has been spent with my sister and nephew! I’ve been really loving seeing my nephew! He’s at such a fun age (4)! 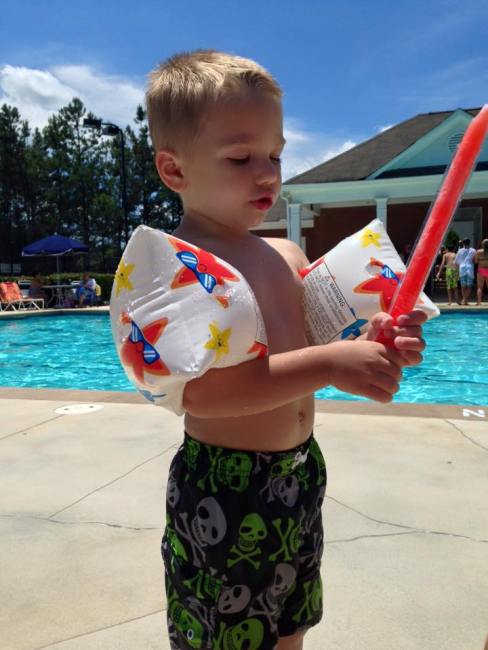 He still won’t cooperate for pictures! Oh well! At least he’s fun to play with! His little voice melts my heart and he gets so excited to see me! I really wish they didn’t have to go back to Wisconsin next week! 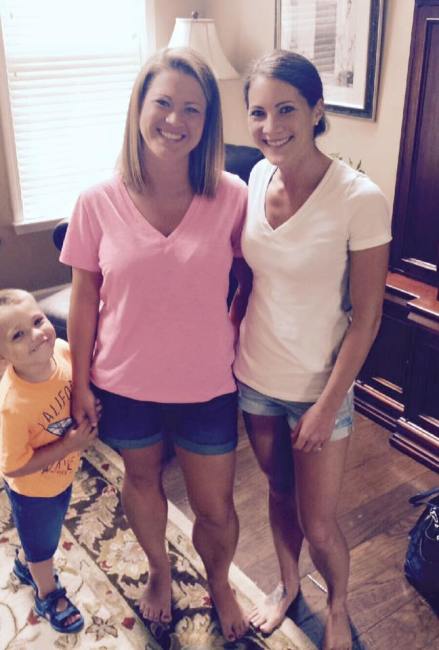 Aside from lots of family time, I’ve managed to go to the gym pretty regularly again. I’m really liking being back and I’m reactivating my ClassPass again too. I waited because when I went to reactivate it, it said I’d be charged the monthly rate of $99, but Atlanta is $79! Also, I had just paid my hold fee a week ago ($20 a month), so I wanted to know if it’d be refunded. I finally heard back today and they said the fee is still $79 and she will also refund my hold fee, so I’m hoping it’ll be up and running again soon. I’m looking forward to getting back to regular classes!

I got my haircut today! FINALLY! I really want to get bangs again, but I’m waiting until Kassie’s wedding is over in August since I’ll be doing some sort of up-do since it’s an outdoor, August wedding in Georgia! I don’t want my bangs getting all frizzy and crazy in the humidity! 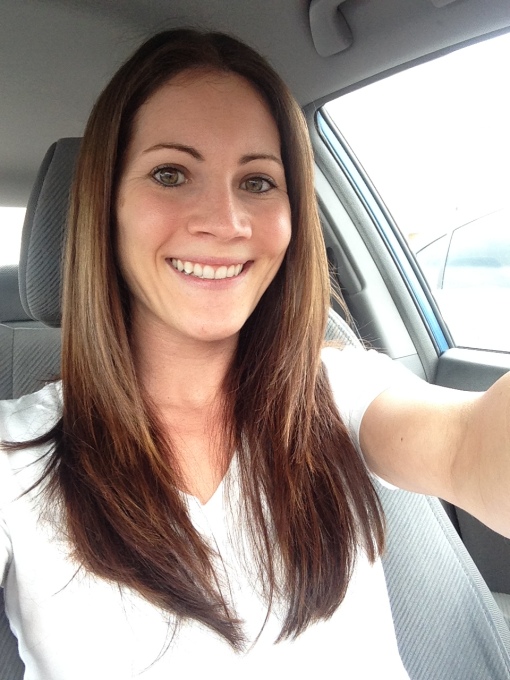 If anybody thought I was kidding about living in these white V-neck shirts, I have lots of evidence. I’m pretty sure every picture I’ve uploaded has me in the same shirt. And they are all on different days. Also, I’m deciding on dying my hair back darker again. It’ll eventually lighten up, especially since it has to be a semi/demi-permanent dye. But, I kind of like the color in the picture above (which is about 4″ of roots, and then the bottom always stays dark from the dye)! So I just can’t decide now!

I got the job on the tele floor! My first day is July 27th (for orientation), so I’m going to try to keep my current hours the same in the ER to stay at the higher pay level as long as possible. The pay cut is really going to suck, but life isn’t all about money. (It should be all about travel, but baaaaaabieeeesssss….) I’m actually really looking forward to doing something different, even though I really don’t think I’m going to enjoy floor nursing. But, four days a month! That’s all!

I’m about to have dinner with Jon and then we’re probably going to Trivia! Well, he is, and I’m deciding still. I had my first kickball game tonight, but the weather is pretty horrible and I’m not that hardcore! So, I’m going to opt for indoor activities and hope kickball is rescheduled!

Now, for your reading pleasure, a survey!

B – Biggest Fear: Flying and my house catching on fire! (Jon makes fun of me all the time because I’m so paranoid that our house is about to burn down.)

D – Drink You Had Last: Water

E – Easiest Person To Talk To: Jon is definitely up there, but aside from him, Laura (top picture) and Crista (bottom picture)! They’re always nonjudgemental and give good advice! 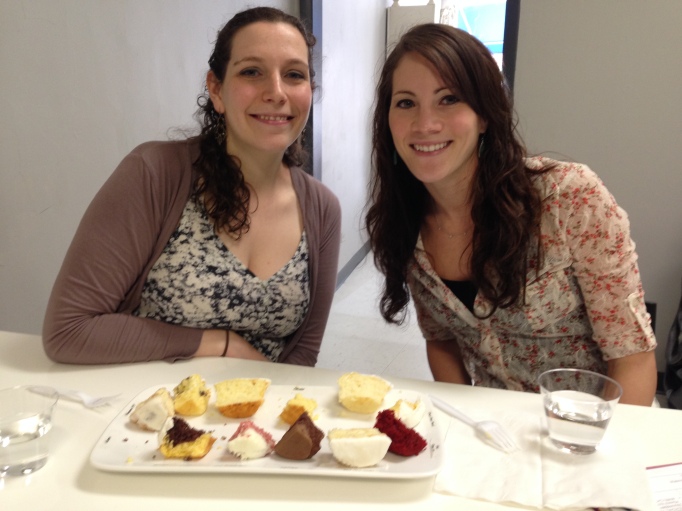 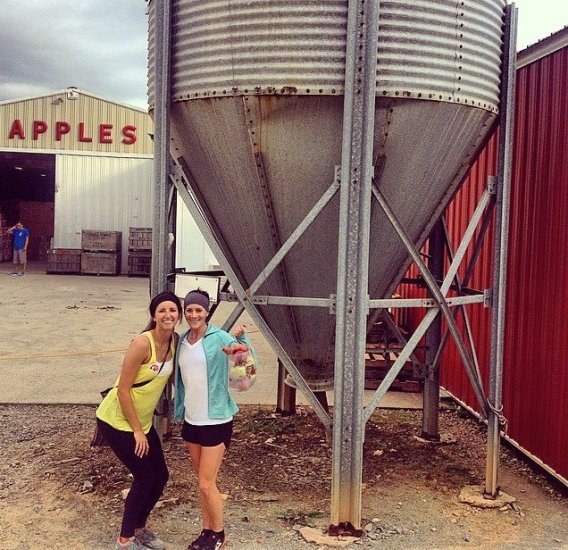 F – Favorite Song: I don’t really have one. I like anything catchy

G – Grossest Memory: Log rolling a patient in Iraq that had just been blown up by an IED. His boots were both on, but when I held his legs to roll, the top one literally just flopped over because the damage from the IED was so great… 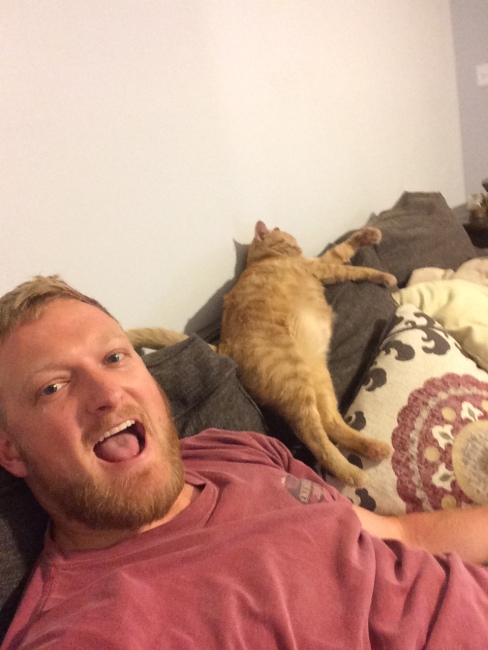 J – Jealous Of: People who have adventurous husbands that want to sell their house and travel with me (I mean, them…)

L – Longest Relationship: I’ve been with Jon now for almost 7 years, with a few breakups in there

O – One Wish: To have a healthy baby!

P – Person You Spoke To On The Phone Last: Crista, she actually called me back right after the letter B on this survey

Q – Question You’re Always Asked: “How much do you weigh?”

R – Reason To Smile: My cats make me smile a lot… Is that lame?

S – Song You Last Sang: I have no idea

U – Underwear Color: White. My one white pair of underwear

V – Vacation Destination: Is this my favorite? Australia (top photo is London Bridge), Greece (bottom photo is Santorini), Belgium, and the Netherlands win so far. My absolute dream is Iceland, with Norway following right behind! 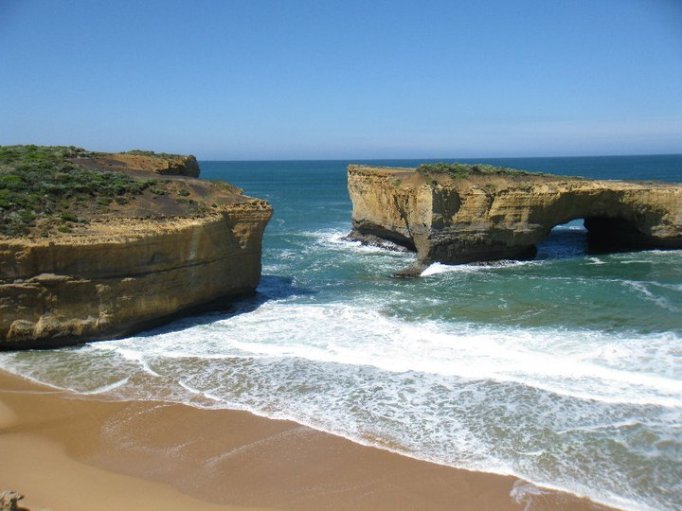 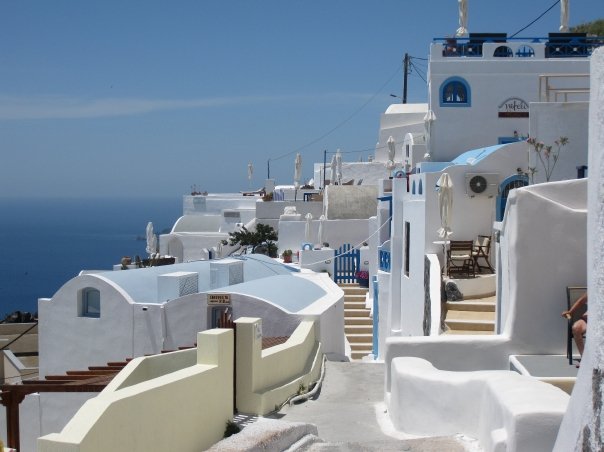 W – Worst Habit: I bite the skin around my nails! I just can’t stop!

X – X-Rays You’ve Had: No idea… I’ve had two MRIs, which are probably the biggest

Y – Your Favorite Food: The sweet potato casserole that my mom makes! She only makes it for Thanksgiving and my birthday, but it’s so insanely good!