I’ve still made hardly any progress on trip photos! I’ve gone through maybe 350 now out of 3,200! That’s the worst part of the trip- sorting through photos!

I’ve had a fun week though, despite this being my heavy work week (which continues until next Wednesday).

Tuesday morning, I met a girl from work at Sun in my Belly in Decatur!

Our breakfast was so good! Mallory and I both ordered scrambled eggs, bacon, and a biscuit, plus Mallory got fruit and grits. The fruit bowl was all berries and no melon (how I like it), and the rest of the food was so good! The eggs had such good cheese in them, the biscuit was so soft, and the bacon was so delicious (and I’m so picky about bacon). I also got a vanilla latte that was amazing! It wasn’t bitter at all and it was so smooth! I was in heaven. The line there is apparently out the door on weekends, but it was perfect during the week!

After that, I headed to Gina’s to start bachelorette party planning! It was a fairly productive day, but now the maid of honor is proposing other ideas. Quite frankly, it’s a pain in the ass to plan a bachelorette party! Especially something out of town. Nobody responds very well to Facebook messages and it just makes the job really difficult. Plus, nobody has told us a set budget at all so it’s hard to know what people can afford.

I think the rest of my Tuesday probably involved some grocery shopping and making dinner with Jon.

I worked Wednesday and Thursday. Thankfully, I had fairly decent days. Neither day involved working out since my hip was really bothering me from kickball still, so I’ve been pretty inactive, aside from all the miles I’m sure I walked at work. Jon and I did go to trivia on Wednesday night with his friends. We went the other week and it was fun. I’m still kind of the awkward outsider since Jon knows most of them and they all know each other, but in time, I’m sure I’ll get to know them! Although, trivia is on my kickball nights now, so I don’t know that I’ll be playing trivia much unless a game is rained out!

Today I had brunch plans with another girl from work! I was sleeping so hard this morning. No clue how I even managed to get out of bed. Work wears me out.

We went to First Watch for brunch and I had a hash that was so good (and also what I had the last time I was there). It was so good to catch up with Stephanie since she’s out on maternity leave. I also got to see her precious baby girl, but she slept the whole time! I wish Stephanie lived closer to me since I don’t make it that far north very often unless it’s to see my parents, but I really like spending time with her!

I ended up stopping by the mall and buying a dress after, which I may or may not return. Then I grabbed some Chipotle to take to Jon at work and visited with him while he ate lunch.

I caught up on the Bachelorette and cleaned up the house just now. I was hoping to be headed to Gina’s awhile ago, but she hasn’t texted me back. I’ll be stuck in traffic for at least 1 1/2 hours now if I head to her house, but we’re supposed to be doing wedding stuff with Kassie tonight. I may just skip out if she doesn’t get back to me within the next 30 minutes or so because I have no patience for sitting in traffic all night, especially since I work all weekend long!

This is a random side note, but I am dying to get my hair cut! (Also, I don’t even know why I buy clothes because all I wear is a white v-neck shirt from Target 24/7. I have two that I just rotate on my days off.) 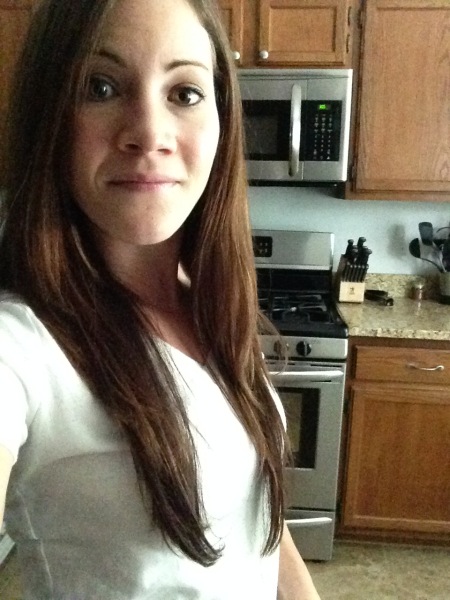 I can be completely fine with my hair and then I decide I just have to have it cut as soon as possible. It doesn’t look nearly as bad in the picture, but it’s just getting way too long for me. I think I’m going to get a good 4-5″ cut off when I go back. I was also really considering not dying my hair anymore, but I’m going to keep on coloring it, I’ve decided. My roots are around my eyebrows now, but it’s not that obvious. I don’t like my natural color though. So, once I get paid again (since our paychecks this week were a joke since we were on vacation), I plan on getting it fixed up. I want bangs again too, but I’m going to wait until after Kassie’s wedding to do that.

Off to go find something to do! Jon just got home, so maybe we’ll do something together on this fine Friday night! Nice and early though cause of my work weekend!