I made it to the gym again! Woohoo! I was so irritated because I couldn’t  find my keys! I looked for 45 minutes and was at a loss as to where they could be (I use TWO rooms in the house- the kitchen and my bedroom) so I gathered up my spare and headed out.

I ran 1.5 miles and then did back squats, deadlifts, good mornings, one legged squats, and then stretched. I was sweating up a storm and made it in and out in about 50 minutes. I would have had more time had I not spent 45 minutes (literally) looking for my keys. But I feel pretty happy with making it to the gym every day that I was off this week! Granted, I’ve been lazy because of being sick so I had plenty of time, but still… I really want to make the gym a part of my daily routine. I do go fairly regularly and have for years, but definitely nowhere close to how much I’d like to go!

And now I’m eating this: 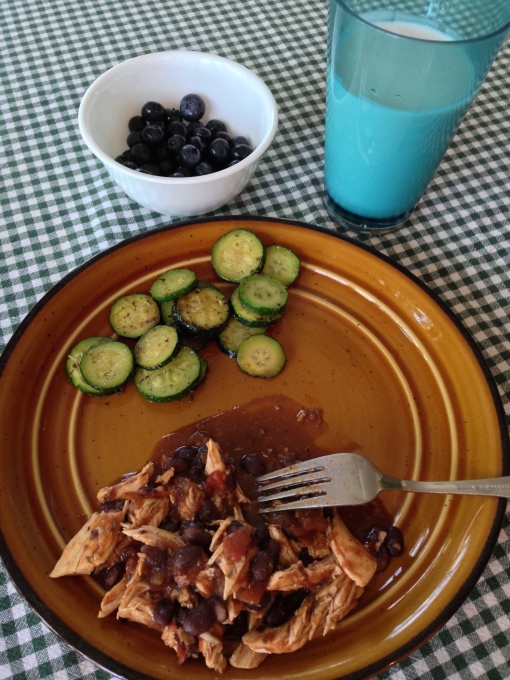 I’ve been lazy with my cooking, so last night I baked some chicken in salsa, heated up some black beans, and made it a meal. I’m taking it to work with me today but I fried up some plantains and have an avocado to stick on it at work. It’s actually really delicious. I thought about putting rice with it but I need to really cut out eating grains again (after my pumpkin cream cheese whoopie pies are gone…). And of course, some zucchini, blueberries, and my daily cup o’ kefir.

While I was cooking last night, I witnessed some neighborhood drama. A guy drove down the road and hit a car on the side of the ride. His wife and kids were in the car. All the neighborhood kids and adults were outside and saw it. The man who hit the car got out and started swearing up and down and telling the guy that he parks his car too far in the road. He was asking the guy if he thought he was better than him (cause he’s a steel worker) and what kind of jackass parks his car in the middle of the road! How dare he be so pompous to think his car can just be in the middle of the road! Anyway, as he’s dropping F bombs all over the place, all the little kids are just horrified. And the adults, clearly. And me, cause who would ever really think that somebody who parks “in the middle of the road” (he doesn’t- really- AND the roads here are so wide!) must do it because they think they’re better than their neighbors. The guy said he actually parks a little further out because he wants people to slow down since the kids are always out playing basketball in the street. What kind of adult acts like that?

Another thing I’m amazed that people still do: smoke. I guess with all the indoor smoking bans, you forget that people actually smoke. It honestly takes me by surprise whenever I see people light a cigarette. Especially younger people. Don’t we know better?

I track my condo complex online for recent sales. I was super super super pumped to see that our exact same condo (except ours is cuter- nicer kitchen and bathrooms) sold for $40,000 more than I bought mine for! And the three bedrooms went for a little over $50,000 than I bought mine for, so I’m really hoping the market stays this way! We aren’t selling yet, but probably in 2-3 years. I definitely like seeing such a big increase in the price of the condos nearby!

My neck is so sore from my swollen glands! I can’t wait to get over being sick!

It is BEAUTIFUL out today! It’s breezy and cool and sunny! Perfect! I’m totally loving it and am really going to miss this New England weather when I leave in 11 days! I can’t believe there’s so little time left here. I’m actually kind of sad. I love it up here! I’m also sad that I have to work on such a beautiful day!

Let me leave you all with a question. What happens when coffee beans go bad? I opened some coffee about 3 months ago now and still brew it in my Keurig occasionally. I haven’t noticed any difference in the flavor. I feel like it must be a lie when they say that it’s best within a week…