Today ended up being a pretty fantastic day! I didn’t end up waking up in time to go to the gym, but hey, after 3 nights at work, I’m just going to let it slide! I got ready for the day in Boston and then headed out to meet up with Rachel, one of the girls who is now traveling up here that worked with me down in Atlanta.

I was venturing onto the T for the first time since being here (it’s their mass transit, sort of like our MARTA but a lot more expansive) so I headed up to the southernmost station and the parking lot was full! I attempted to head to the next station that was only 3 miles away and somehow got lost in a parking lot. Seriously. My iPhone kept telling me to turn onto named streets in 50 feet while I was smack dab in the middle of the parking lot. I don’t even know where my phone thought I was and I was about to throw the thing out the window but know that I obviously can’t live in a city that I don’t know without my iPhone. iPhone saved. I did make it to the next station eventually…

If I wasn’t sweating enough on the train, I got all my sweating in down in Boston! I also left my camera at home since it was supposed to storm today (spoiler alert: it didn’t- and I didn’t get any pictures of the awesome things we saw other than on my cheapo iPhone). I was actually so glad to be meeting up with Rachel! A familiar face is nice! Since Jessica and I work such opposite days, my interaction with people has been mostly limited to people I see at work and that’s just not the same as friend time.

We ended up eating pretty quickly after I got there at Zuma Tex-Mex Grill. The food was pretty decent and we spent the time catching up about how horrible my new job is and what she has in store for her (she starts her travel assignment on Monday). We decided to head over to do a Charles River tour after lunch!

Guys, it was hot today in Boston! We were sweating like crazy. I’m pretty sure we spent half of our walk talking about how much we were sweating and by the time we got down by the ticket area for the tour, our clothes were soaked. We sat inside a mall and enjoyed the cooler weather until our 4:15 take off time. 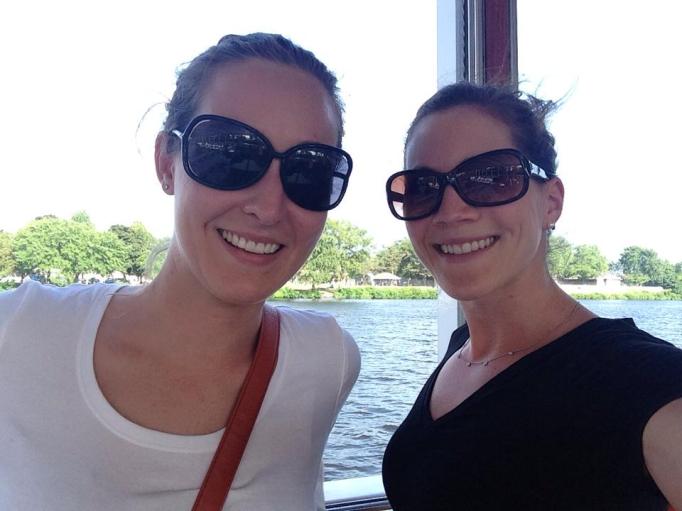 My hair was down and looked good to start with… And then we sweated and I couldn’t take it anymore! I just can’t look good in the summer! It’s too hot for this wavy haired girl! The tour was actually really pretty awesome. It lasted about an hour and really didn’t take us super far, but we got to sightsee from the middle of the river, so I liked it! 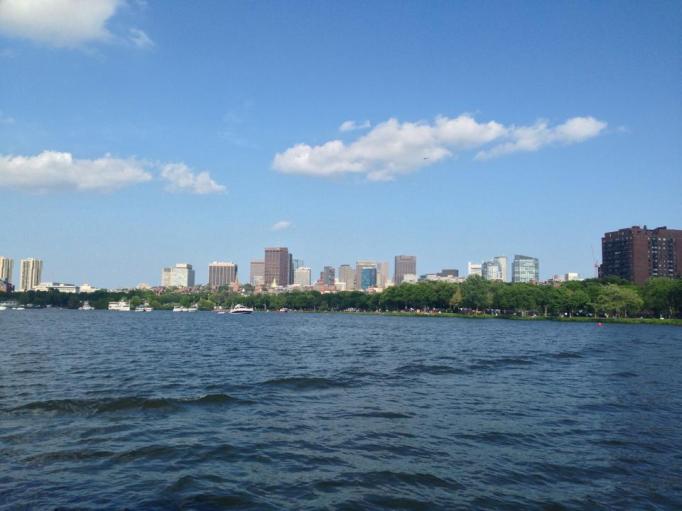 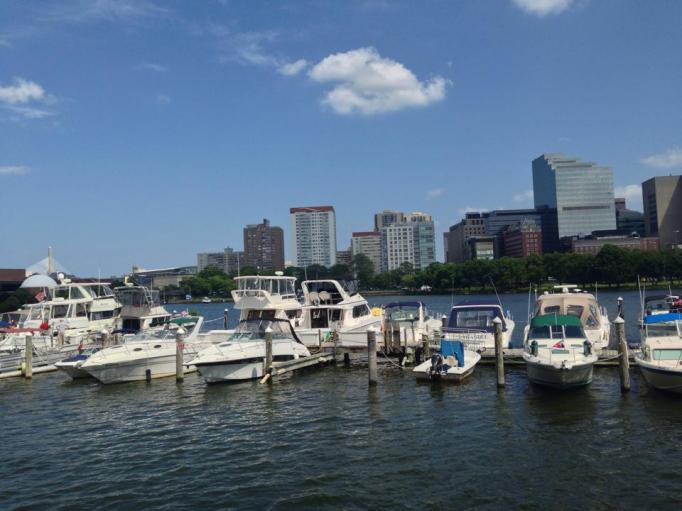 After we did our tour, we decided to get some dinner and head towards the 4th of July festivities (it was moved to today because of storms tomorrow). We ended up having pizza for dinner and having plenty of time left, so followed that by some ice cream. I’m pretty sure I consumed a year’s worth of sugar today between an iced milky way coffee, ice cream, pizza, garlic bread, and a vitamin water. Whatever. Thankfully that’s not my normal diet.

We got down near the festivities and realized that the crowds were just absolutely insane. We decided just to head across the river and view the fireworks from the other side and figured we’d be able to hear the band playing from over there too. Once we got to the bridge, we realized it was closed. It was another mile to the next bridge so we decided to just step it out and make it across the river to hear the bands. Another five gallons of sweat later, we made it to the festivities on the other side of the river! We couldn’t really hear the band and it was super crowded, so we sat down on a little bridge and hung out. We got to looking at train schedules and decided maybe we couldn’t stay till 11pm when the fireworks were supposed to end (she had to take a commuter train and the last departure time was around midnight, plus she had to switch on the T three different times).

We headed off to the T around 10pm and made our way through the crowds. At 10:10, they started the fireworks! A whole 20 minutes early! People were running down the streets to see them! We managed to see a few over the buildings but hearing fireworks from between city buildings was something else! It was so loud and the sound was resonating between all the buildings! We could also see the fireworks on most of the glass windows! I sort of wished we had stayed to see the show since it’s supposed to be number one in the country, but not enough to want to fight the crowds on the T after they ended.

I had a nice quiet ride home aside from thinking the train was about to derail and got a nice quick shower in. I’m about to edit some photos for a few minutes and head to bed. I work 11p-1a tomorrow (I picked up 2 extra hours) and Jessica has been texting me all night tonight about how horrible it is so I’m dreading it. I also have no food to eat tomorrow, so I need to go to the grocery store in the morning. The gym is closed for the 4th, so that’s off the morning schedule.

I’m looking forward to Sunday. Jessica and I are going to go have brunch at the oldest bar in the US (White Horse Tavern) in Providence and do some exploring in Rhode Island! Although I still miss Jon, I am loving my days off and taking advantage of the traveling that we are able to do! I’m also off at 7 on Monday night since we have hospital orientation early on during the day, so her and I are going to hang out after I get off work too. I’m definitely looking forward to actually getting to spend some time with her since we haven’t spent much time together other than a trip to Whole Foods last week!