I’m finally back! Woohoo! I’m  a married woman! This past week has been insanely crazy! Who knew getting married took so much time?! Friday morning rolled around and I knew we were getting close! I woke up and got my nails done, picked up my car (I ran over a nail just in time for the weekend), and then headed out to our rehearsal! 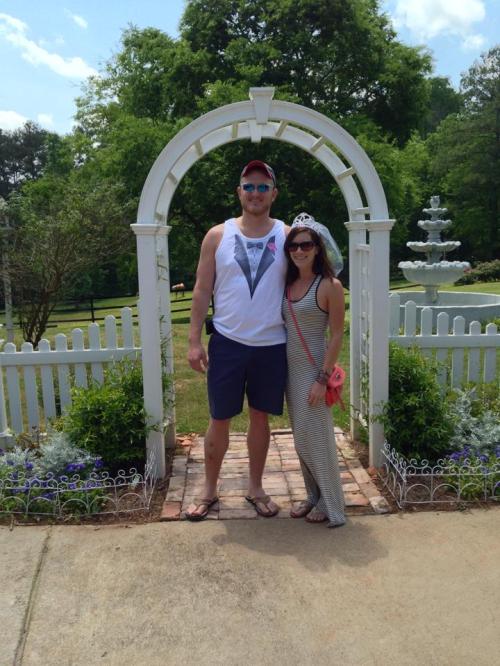 Jon showed up in that cute tank top! All his groomsmen had on gray ones. Cute. 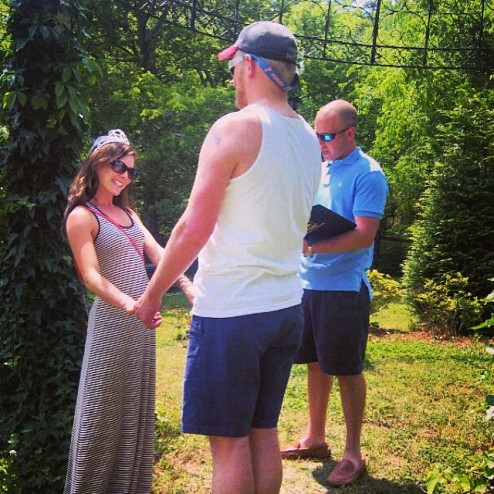 Practicing our ceremony! Oddly enough, that is our friend Danny, who we were in the Army with. Since Jon and I aren’t religious, we were brainstorming who could actually perform our ceremony. I mentioned Danny and we laughed about it for awhile and then finally one day, we were both like, “No, but really, that would be awesome.” He’s well spoken, well organized, and it was an honor to have a person we both know stand up there with us to marry us. This was the first wedding he did and it went off without a hitch. Amazing job.

Friday night we spent the evening at my parent’s house having dinner with Jon’s family and the wedding party. My aunts and uncles came in and it was so nice to see everybody! I had really wanted to stay later, but left around 8pm since Jon and I were checking into the Westin downtown. When we got down to the Westin, we decided to run up to the Sundial Cafe to see the city, and we happened to run in to quite a few people who were in town on Jon’s side of the wedding. We stayed out till midnight with them and headed back to the wedding!

Saturday morning (after barely sleeping all night), I went over to Gina’s parent’s condo to get ready with the girls. My hairdresser, Malcolm, met us over there to start on my hair! It was so fun having my hair professionally done up like that! Jessie did my makeup (not done in the photo below) and we listened to that I’m so Fancy song about a million times since Jessie and I had been singing it all week long. #weddingsong #wesofancy (I hashtag cause I’m cool.) 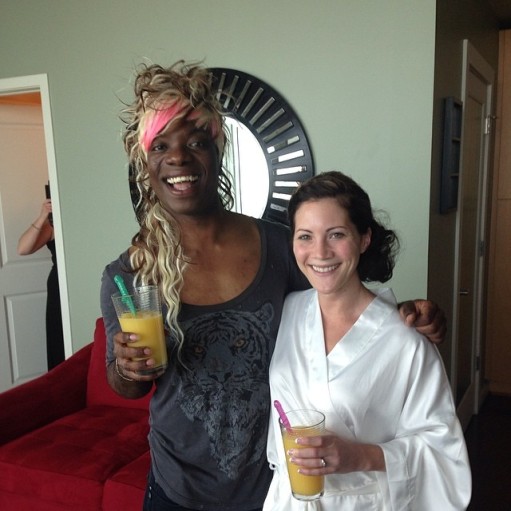 We got there are 10am and thought we’d have tons and tons of time, but when the alarm went off at 1 for us to pack up, it had come really fast! We rode out to Lake Allatoona Inn for our ceremony!

When we got there, we had plenty of time to go! We got there early for me to change, but my mom wasn’t there yet and the photographer wanted to photograph me getting dressed. So we hung our in the room until Mom was ready to get me in my dress! Luckily, we were able to get it zipped.

Also luckily, although it’s the end of May in Georgia, the weather was really not too bad! It was a little humid out, as always, but really, in my wedding dress, I wasn’t nearly as hot as I had expected. The girls and my family took our pictures and Jon and his guys and his family took theirs. Then it was 4:30 and I was shut back in the bridal room till the ceremony!

I started getting a little nervous at this point. Well, not nervous, but my stomach started feeling a little off. I sucked it up, loosened my dress for a bit, and then just kept hanging out. Right before the girls walked down the aisle, Laura came back in and we had a moment. This is the only time I cried! I managed to get it together and then went out for my dad to walk me down the aisle! 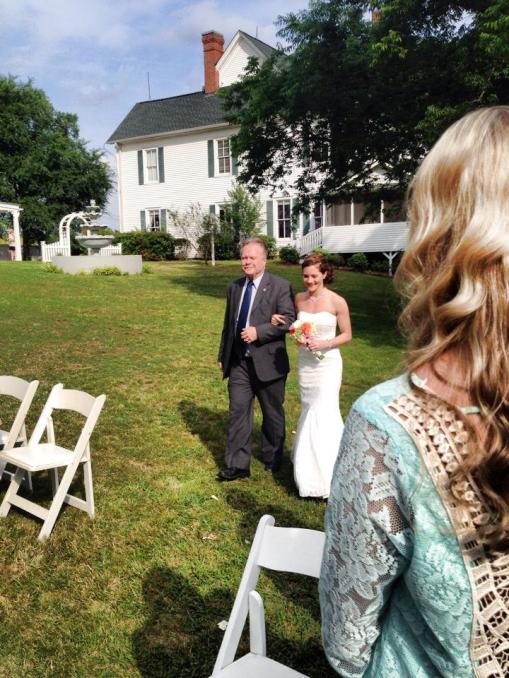 For me, this is really the part of the wedding I was so excited about! I couldn’t wait for Jon to finally see me in my wedding dress! I almost cried twice walking down the aisle, but then at the end, my dad (who hadn’t come to the rehearsal), my dad forgot to hug me and just walked away after he said “Her mother and I and the whole damn family” were giving me away, so I had to call him back and that made me laugh. Once I got up next to Jon, I didn’t even come close to crying (total surprise for me- I thought I’d cry for the entire ceremony).

It was really awesome standing up there next to him. I could tell the ceremony was going smoothly and aside from a few small things, it was perfect (I forgot to repeat Danny, Jon’s hand was swollen from his broken elbow and I had to visibly force his ring on, etc.)

The ceremony lasted 19 minutes total (Jon said), and that was with a train that came through. At the end, Jon Rick Rolled me. His vows totally ended with the Never Gonna Give You Up song. It got a good laugh from the audience. 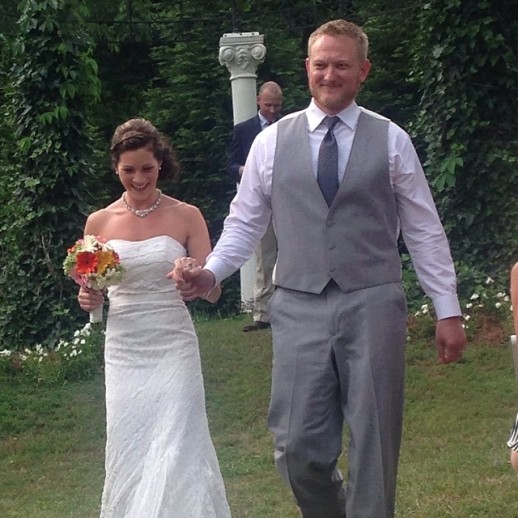 After the ceremony, we did all of our family pictures while the guests had cocktail hour. Then we were announced, Jon and I shoved our faces with barbecue that we got tons of compliments on (it’s my favorite place- Cue), and then had our cake cutting.

Right after the cake cutting, Jon and I left to do our pictures by ourselves. Since Jon had smeared cake all over my face, I’m hoping the icing isn’t visible in the photos after that! We came back in to music playing and guests dancing, and then Jon and I did our toasts and then our first dances (we did this out of a traditional order so that people wouldn’t be sitting around during our photos). Kassie and Adam gave our toasts and they did a great job! I was really impressed! And then Jon and I finally had some time to enjoy our wedding! We danced for over an hour and then we did our getaway in the Jeep!

Jon and I headed down to our house to swap out cars and headed back down to the Westin since we were staying there. A bunch of guests came out to Meehan’s downtown to meet us for drinks. 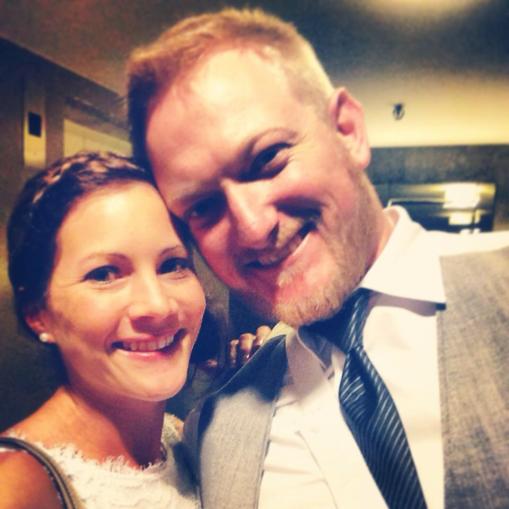 Although Jon and I didn’t get to sleep until 3am, we both finally slept so good! I hadn’t slept all week so I was so excited! We met Jon’s family for breakfast on Sunday morning at Cracker Barrel and then headed over to my mom and dad’s house to hang out with my family. We got there just in time to see my aunts and uncles for about an hour before they headed out. Jon and I headed home after that and finally had a chance to relax! After cleaning up a bit (we had 9 people stay in our house all weekend), we sat down to watch a movie and then ended up falling sleeping not even halfway into it.

Jon and I talked about our wedding pretty much the entire day on Sunday. First of all, we got so many compliments on our wedding. When Jon and I looked at the venue in the winter, we picked it because it was in our budget and it had the dates we needed available. But everybody absolutely loved in. People liked the mix of the indoor and outdoor area, there are horses on the land that the kids liked to look at, there’s a big driveway to hang out in. Not to mention there is nice shade there and there is just so much greenery! It ended up being really pretty! Tons of people said that it was really simple and that it was laid back (our goal). We were told it moved along well and didn’t seem to last forever (which is really important if you go to a lot of weddings). Second of all, Jessie hands down made our day! I don’t even have a picture with her, but she coordinated the entire day! She was the go to woman. She told everybody when to walk during the ceremony, handled the DJ and bartender before and after the ceremony, cued the DJ for the bouquet toss and first songs. Although she has never coordinated a wedding (but I think she said she has now gone to 22 weddings or some crazy number, and she’s had her own) she really could have been a professional. She made our day! So, Jon and I were extremely happy with our wedding and really loved everything about it.

Anyway, that’s the end of the weekend. I have more to talk about, like my new job as a travel nurse (it’s official, guys!), but I’ll do that tomorrow. By the way, almost all of the photos above (except for the one of my mom and me) were taken on phones. Laura had a camera but I haven’t gotten her photos, and all my others are still on my flash drive and I’m not skilled on Jon’s computer, so that’s just the mix of Instagram and Facebook photos.