Yesterday I had a surprisingly good visit at the gym! I had to get a money order for my wedding photographer (guess who lost their checkbook?) and somehow totally missed the bank on the way to the gym. I ended up knocking out 5 miles in 48:37, which is pretty good considering how little I’ve been running lately! I did all speed work, as usual on the treadmill. Anywhere from 5.5-8mph. Typically I don’t go any lower than 6, but I was spending a lot of time between 7-8mph, so I needed more of a break. Then I did 5×5 back squats at 105# and 5×5 deadlifts at 115#. I knocked out a few pull ups, push ups, and abs and then it was 4pm, so I stretched and headed over the bank, which was CLOSED at 4pm! When did Bank of America start closing so early? Guess I’ll be paying my photographer a little later on. But I was a little bummed that I hurried out of the gym to make it to a closed bank.

After my workout, I ate 6 pieces of bacon (I really wanted chicken sausage but didn’t have any). Jon bought Oscar Meyer nitrate/nitrite free bacon, but Oscar Meyer is just SO salty! I prefer my 365 brand from Whole Foods all the way. And really, I wanted some chicken sausage but it smelled a little off, so I decided to forego that option and just have some bacon. I had a pretty big serving of my squash casserole and a smoothie with kefir, PB2, berries, a banana, and greens. I was surprised I ate so much. Then I followed it with 6 Thin Mints. Oops. I need to get these Girl Scout Cookies out of the house. 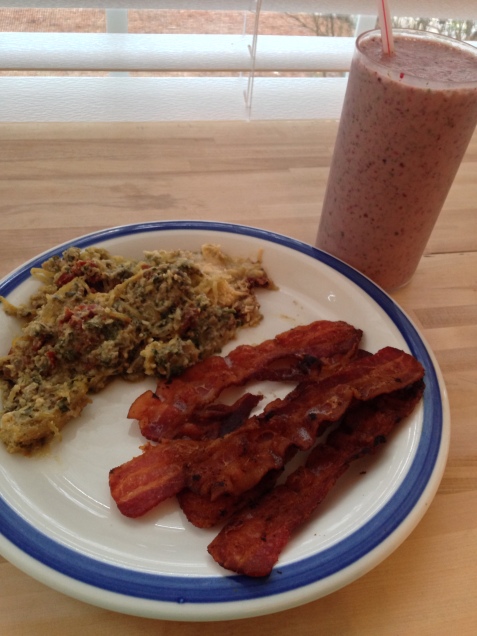 I definitely was feeling much more “on” after a workout and being able to eat my own food and I had slept in my own bed too. I get thrown off way too easy by being out of town. I don’t eat out that often (Jon and I were just commenting on how we’re eating out so much lately- which is Mexican once a week compared to maybe 1-2 times a month before) and eating out for all my meals just don’t work with me. And for just 2-3 days, I don’t want to go buy all new food to eat for where I’m staying. I also am feeling much more motivated to work out after getting just one good day in. I’m too easily derailed from the gym lately and really need to work on that.

I got home, cleaned, and studied for my test. Jon was gone most of the evening and went to bed when he got home, so it was a quiet night before a day of work and an evening of tests!

Tonight, after working all day, studying for a test, and taking a test, I was excited to get to the gym to walk out all my soreness and do some abs and a little upper body! I got to the gym (still in my scrubs from work) and realized I forgot my sports bra! Bummer! I was actually really in the mood to be at the gym too! I was about to work on in scrubs though, and I also wasn’t about to work on in a tight white t-shirt with a black bra with red lace on it. No thanks.

Off to upload some engagement photos and eat a 10pm dinner!