I ended up having a really awesome Sunday! So much that I’m going to forgo what I wanted to talk about and just talk about my day. After having another really horrible night of sleep, I managed to drag myself out of bed in time to make breakfast and head to the gym for a 10:15 arrival. I was hoping to run and get in some squats and deadlifts, but I figured I had left too late for that since Gina was meeting me for yoga. Right as I finished up a really fast 2 miles on the treadmill (which didn’t continuously tell you your distance and I hated it), Gina showed up. I was still super snotty but was able to breathe surprisingly well for being so sick. I’m sure running inside helped with that. We did our yoga and I wasn’t super miserable this time. This is my first time going at a regular gym and not at a yoga studio. Crista has managed to drag me along to random yoga studios a few times and I just hated it. It was all about breathing and they named all the poses and people were doing some crazy shit, but today it was way less advanced! I was still definitely shaking a ton, but people were pretty tame and I was able to do most of the poses. I still don’t like yoga, but I’m definitely going to try and go more often to really start working on my flexibility. But I didn’t even sweat. So that makes me feel like I didn’t get a real workout in (aside from my run).

After the gym, I called Crista to see if she was available. She was just down the road from me and was about to have brunch with Amy and Austin (a married couple she is friends with that I have met a handful of times), so I went over and we sat outside and enjoyed some brunch! The weather was perfect! I had on yoga pants and a long sleeved shirt and was comfortable! I really soaked it in because it’s supposed to snow again next week!

I left from there and went to Taco Mac to meet with Jon and his friend, Megan. We hung out for about an hour and then headed home. 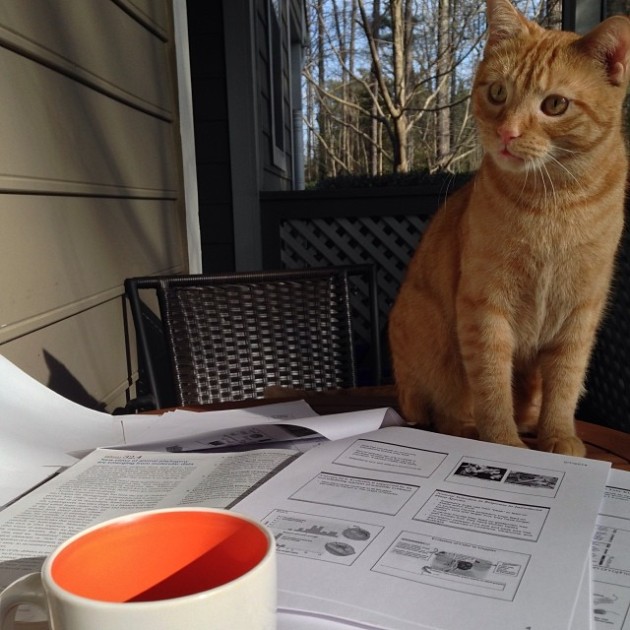 I started studying on the porch when I got home. Tom joined me. I have been easily distracted still since Jon and I are trying to finish up the wedding invitation stuff and make sure the website is fully ready since people will be looking at it now! Now I’m about to get back to biology. I should have definitely spent more quality time with my biology this weekend, but the nice weather was calling my name! And it was really nice to be able to actually spend time with people too!

I’m hoping for a good week at the gym, but the snow is supposed to hit sometime tomorrow or Tuesday (depends on where you look) so I have no idea what will happen! I think on Tuesday, but I really hope it doesn’t get too bad! I have to work Wednesday and Thursday and we have our test on Tuesday night on campus at 7pm, so we’ll see. This winter has really sucked in Atlanta! We only have one big snow a year usually so two will really be inconvenient! And if I’m snowed in, no running and no gym! Womp womp.