I’m feeling a little better this morning! I napped for 30 minutes last night and woke up feeling totally horrible. My head was killing me from laying down when I was so congested and I could barely sleep. By the way, I am the worst sick person. I don’t complain much to other people, but to Jon? I sat next to him on the couch, sniffling and giving him the pathetic “I’m siiiiiick” over and over. “Can you cook me dinner please? I’m siiiiiiiick. My head hurts.” I think I got it from my dad. When my dad gets a cold (which isn’t often), you would think he had both of his legs amputated. Or maybe I like to try and milk it because when I was little, my mom was so awesome at taking care of us and now I want Jon to do that too! Which he does take care of me, but he needs to step up the sympathy like my mom did.

I don’t want to get everybody jealous here, but the sun just started coming through all the clouds! Maybe I’ll muster up enough energy for a run today! I really want to go, but I can’t take a deep breath without coughing so it may not be smart. And I have a ton of biology to work on since I have a test next week. Woe is me. 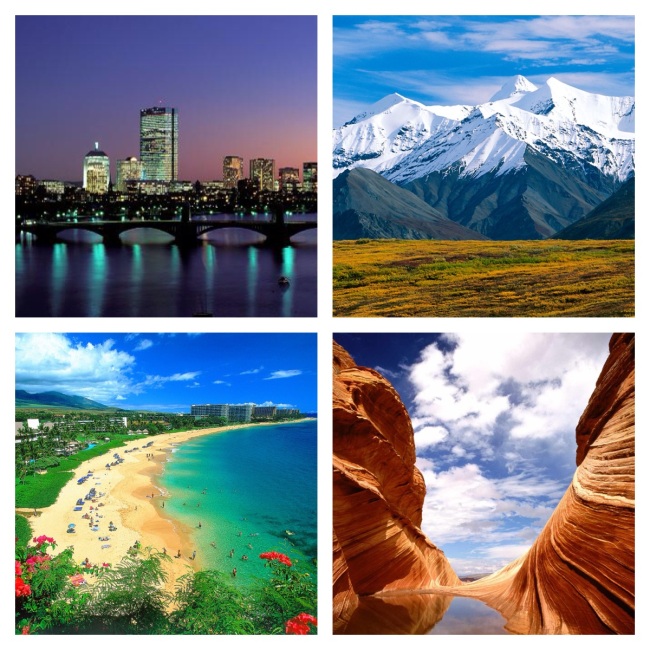 Those are some of my top places. Boston, Alaska, Hawaii, and Utah (I’ve actually been there in Utah- it’s Zion National Park). I love Atlanta and really have no desire to ever move away for good. I moved a lot when I was younger and feel like this is home. I have a feeling that Jon and I will move away from Atlanta at some point, but I think both of us want to live near family. My friend makes $18 an hour to babysit. There’s no way I will pay a babysitter an arm and a leg when I have family!

Anyway, I just need to go explore! There really are few things I love more than getting to go to a new place (well, aside from coming home from my trip and cooking my own food and sleeping in my own bed and not living out of a suitcase). I really love going out of the country, but after driving to the Grand Canyon two years ago, I realized that there is still so much in the United States that I haven’t seen! And while I still agree with my old way of thinking, which is that it’ll be much easier to see the US whenever we have kids and way cheaper, I’m excited to be able to do travel nursing to explore some of that now! And travel nurses typically make a lot more money, so I’m really hoping to save enough to go on more vacations out of the country over the next 2-3 years. Our honeymoon should be Slovenia, Germany, and Holland. I am dying to go to Iceland. Laura wants to go to Maccu Picchu. I want to go to Finland, Sweden, and Norway. Ireland… The beaches in Thailand. New Zealand! Japan (maybe with New Zealand). There is so much out there to see!

Okay, I have to go work on biology and stop dreaming. I just wish that travel nursing wasn’t so far away (it’s in June of this year but feels like an eternity!) and that I wouldn’t have to leave Jon at home! I dream of the days of being home with Jon and having my days off for myself, so that I could work out and cook us dinner whenever I want! But then again, if we’re only 2-3 years away from having kids, then I need to do this now, especially since Jon is in school and will only be focusing more and more on school over the next few years.

Okay, have a great day, everybody!

2 thoughts on “Traveling the world!”