Tonight Jon and I had set up to have a double date with Brad and Rebecca at Indochine in Jacksonville! After he and I spent the afternoon going for a 2.5 mile run at the beach (totally feeling under the weather and it was 20 degrees hotter than my running weather for the last few months!) and then trying to find out where one of his Army forms is, we made it back to his sister’s to get ready. Rebecca and Brad started dating shortly before Jon and I did five years ago, but were married really quickly and then had our favorite niece, Zoe, and nephew, Slade. We have stayed with them for the last several years and I just love their family!

Anyway, tonight we all left at different times. Brad and Becca had to drop the kids off at the sitter’s house, so Jon and I went to a park in Jackosnville until they were ready to meet us for our double date (by the way, first double date in like, four years, so we were thrilled!). We had been walking around enjoying the scenery, and after a few futile attempts to get him to walk across one of the bridges over the St John’s River, I gave up. Finally, Rebecca called to tell me that her and Brad were on their way, so we turned to go back to the car and head over to Indochine.

As we were walking back, Jon stopped me. I knew that Jon had my engagement ring at our house somewhere and lately he has been messing with me as we’re out and saying things like, “I have a question for you,” implying that he’s going to propose but totally messing with me! He actually did it after I went running at the beach this morning! So, as he stopped me, I just go, “Stop, you’re so annoying!” cause I figured he was messing around again. Then he got on one knee… I’m still totally not convinced and then he pulls out the ring! Then I say, “Oh my god, you have the ring!” and Jon says,

And then, with all my romanticism and rainbows, I say, “I thought you were fucking with me!” And then of course, I said yes. I don’t even swear much. I was just really caught that off guard! I had a few tears and then he pointed out Rebecca standing over in the trees capturing the moment. I haven’t seen the photos yet but am very excited! A few onlookers clapped for us and Brad honked the horn from the car and Zoe came running over! We took a few more photos and then Brad and Rebecca really did go drop the kids off and Jon and I made our phone calls and went to the restaurant a little early.

We didn’t eat at Indochine, but I had two glasses of wine and 1 1/2 glasses of champagne tonight, so the name of the restaurant escapes me. We had a nice, fancy dinner with good wine and good food and I was really extremely grateful that Brad and Rebecca were there. They have been there monthly through almost every step of our relationship, and even when Jon and I were broken up, I still kept in contact with Rebecca. Her and Brad are what I expect a loving marriage to be and I have always felt welcome in their house, so it was really just a perfect ending to the best day ever.

Although I don’t have the actual proposal pictures yet, I have these: 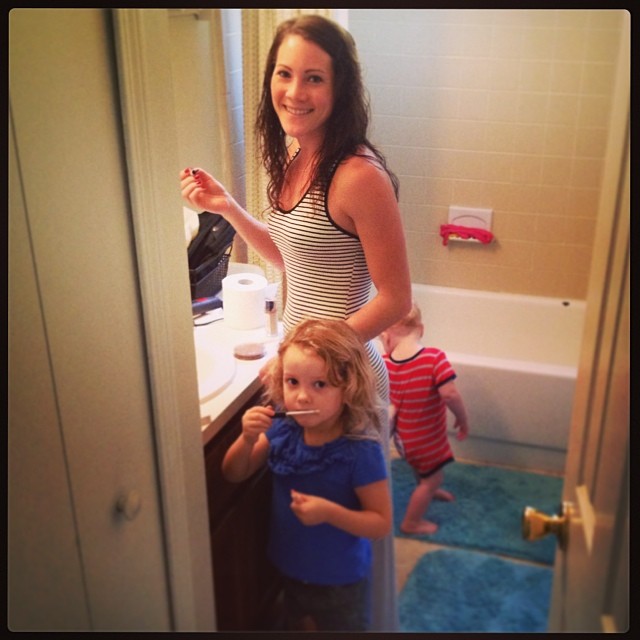 This one of Zoe doing her makeup with me and Slade playing in the bathroom, which is a daily occurrence when we visit and I love it. 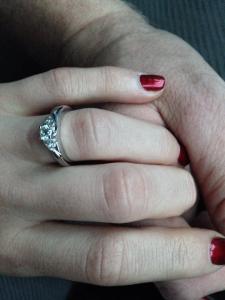 The ring! I have wanted this ring for the last 4 1/2 years, since the first time we were together!

Some photos from Rebecca from our cheers-ing!

After dinner, we came home and popped a bottle of champagne and then relaxed. I got a nice foot massage and now Jon and I are about to get a nice night of sleep before we enjoy our last full day in Florida and our first full day as an engaged couple! Goodnight, everybody!!!