The Love Story Part 2: The End of Iraq

Once we both ended up back in the States, I accepted a slot in the nursing school in Dahlonega and Jon and his ex girlfriend ended up in a relationship. Since we lived six hours away from each other and never spoke to each other, it was easy to get over the relationship.

Two months after getting home from Iraq, I went to Greece with two of my best friends. While I was on the internet there, I saw that Jon had updated his relationship status on facebook to single. My reaction completely caught me off guard and I knew I wanted to see what could happen. I actually called him from Greece, and then we ended up in contact with each other once I returned home. We both had to do a Yellow Ribbon event, which is something the Army makes you do after you get home from a deplyoment. We decided to sign up for the same one in Orlando and I’d go down to Jacksonville first and then we’d go from there.

I don’t remember much of my first trip to Florida. I do know that we spent about a week together and then shortly after, he drove up to Georgia and helped me move into my new house. We spent the summer in a trying time (at least that’s what I call it). We weren’t together but I wanted to be, and he was totally pushing away the idea of a relationship. Finally, on August 14th (the night of a Counting Crows concert), we got together because there was too much gray area with what was happening.

Being long distance was rough. I was able to see him almost every other weekend from August to December because of how my clinical days fell at nursing school. We talked on the phone nonstop, but we also continued to argue a lot. I remember frequently asking him if he’d ever be happy with me how I was, and I got a lot of, “I know who you can be, and I could be happy with that” type of responses. But we kept it going. Spring semester was extremely tough because my clinical schedule changed and I was only able to see Jon on drill weekends. We both knew we were either breaking up, or we had to live near each other. Since I was in nursing school, he moved up to be with me. 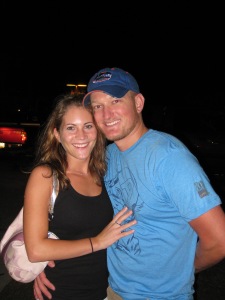 Living together was even harder than being long distance. Plenty of issues arose. First of all, he moved into my house, and it felt like my house to me. This improved slightly when we moved into another house after a few months, but I had a hard time letting somebody into my space. Most of the time, I think we hung out with each other because boyfriends and girlfriends are supposed to, not necessarily because we enjoyed each other’s company. I still felt like he was never happy with me. I never made him a priority over my friends. The list is endless.

We ended up letting Jon’s twin sister’s boyfriend live in our (very small) house, which I thought was temporary. That was another huge source of problems. In February of 2011, Jon broke up with me for a second time. I spent most of the month at my parent’s house, but we never felt like it was really over. I “moved back in” and we hoped that once I was out of nursing school, a lot of our issues would be resolved.

(The picture on the left was over Halloween in 2010, and the one on the right is over Valentine’s Day 2011, when we were actually broken up.)

I graduated nursing school, spent a month studying for my nursing boards, took the boards, and then immediately went to Spain. A girl that Jon was good friends with (and hadn’t talked to in 7 years) lost her mother while I was in Spain. I wasn’t pleased with how Jon was handling it, and he wasn’t pleased with my response. The night I came home from Spain, we broke up (for the third time) over the phone while he was in Florida and I was sitting in the Wal-Mart parking lot.

To be continued again…

2 thoughts on “The Love Story Part 3: Long Distance and Living Together”