Once I was back in Iraq, things with Jon picked up pretty quickly. I came back sometime right at the end of September and was going to be off to Baghdad for the entire month of November. We continued spending all of our nights off together and started talking about the future. You know, the real life stuff, not just the deployment stuff. We would talk a lot about the would you still like me at home type of stuff, and we decided that we thought we would. Despite the fact that you don’t even have somewhat close to a regular life, you still feel like a normal person (you’re not, by the way… deployment “you” is totally different than real life “you”).

We decided that I’d apply to a nursing school just over the Georgia state line so that I could keep my HOPE scholarship (I had to stay in Georgia for it) and that we’d get an apartment together and live happily ever after.

I went off to Baghdad for the month and communication wasn’t quite as easy as it was in Tikrit (where our unit was). The internet was in and out and the phones were no good. There was a much longer wait for the computers. One night we were on the phone and when we went to get off the phone, I told Jon that I loved him. I think his response was something along the lines of, “Weeelll okay, I’m going to go to bed now.” I wasn’t disappointed since we hadn’t really been together that long, but I definitely did love him.

The next day, I got an email from him telling me that he loved me too. Baghdad seemed like the longest month ever. I couldn’t wait to get “home” to see him again! Unfortunately, every flight I was supposed to go back to Tikrit on was delayed, so I spent 3-4 days waiting to get home. I don’t recall if it was a sandstorm or if the flights were full, but I remember being ecstatic when I finally made it on the chinook to go see Jon!

This is actually when Jon came to pick me up when I flew in (flaw in Part 1, it was a long time ago, guys!). So this is when his buddy at the TOC told him I was flying in and he came to get me!

Shortly after I got home, I found out that Jon was going to go to Mosul sometime in December because our unit was going to take over the hospital there as well. I’d be staying in  Tikrit, which was pretty upsetting at the time but in just four short months, we’d be moving in together. We spent the month of December planning out a trip to France for when we returned to the States and working on our plans for starting our life together at home. We weren’t positive when he’d be leaving for Mosul, and I can’t even remember him leaving. It was sometime surrounding Christmas… 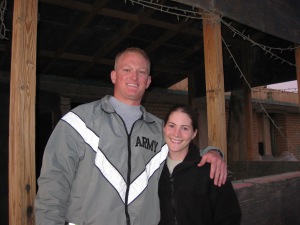 (The picture on the left is their going away “party” for the Mosul people, and the right is one of our awesome Christmas photos, and that cot behind us was where our first kiss was. Romantic.)

Over the next two months, we talked on the phone every night. Luckily our phones were easily accessible, but because neither of us were doing anything and we would spend far too long on the phone every night, we found a lot of time to argue. There were a lot of clues in what he said that led me to believe that he may not be over his ex girlfriend, but since we had elaborate plans for our future, I ignored them. And then one night, he said we had to talk. And that talk led to him breaking up with me. And that break up led to him starting back up with his ex girlfriend.

And so I returned to the United States in April of 2009 as a single woman, who was accepted into nursing school in Dahlonega and in south Georgia.

To be continued… again…

4 thoughts on “The Love Story Part 2: The End of Iraq”